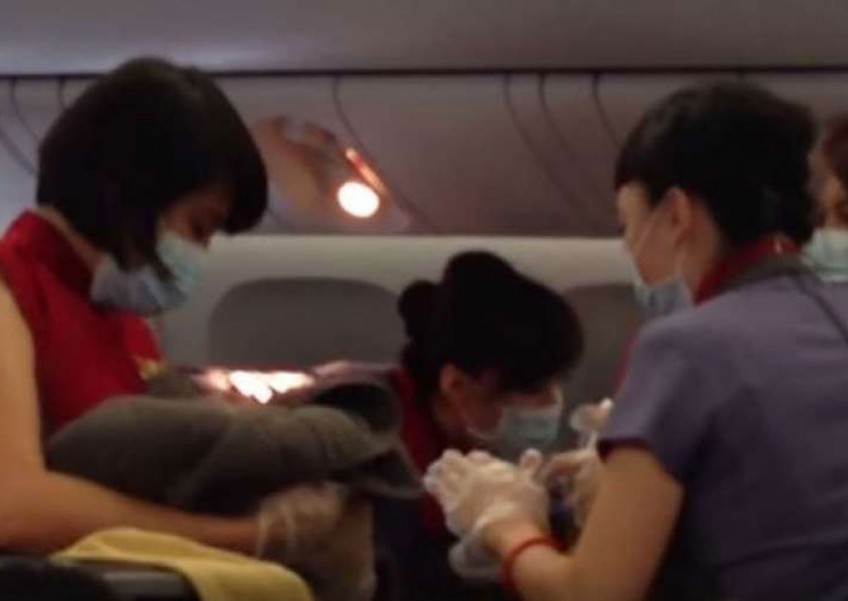 TAIPEI, Taiwan - The mother of a child delivered last week on a US-bound China Airlines (CAL) flight will likely be liable for the costs of diverting the flight, Transportation Minister Chen Jian-yu said yesterday

At an interpellation session at the Legislative Yuan, Chen said that the mother, surnamed Jian, would likely have to pay for the costs of disrupting the flight schedule caused by her going into labour.

"Compensation (to CAL) will likely be inevitable," said Chen.

The mother's insurance company is currently calculating the costs of her childbirth, said the airline.

CAL stated that if pregnant passengers fail to provide proper medical clearance, deceive the company's staff and thereby cause the flight to be diverted, insurance companies are required to pay compensation for passengers found liable.

Mother Must Pay the Price: Lawmakers

Lo raised questions over CAL's responsibility, questioning why it even allowed her to board the plane in the first place.

According to Lo, the government is CAL's largest shareholder and the Ministry of Transportation and Communication (MOTC) should demand that the airline collect compensation from the woman.

Both the MOTC and the airline need to ensure nothing like this happens again, said Lo.

Chen said in response that security measures need to be stepped up and he would not encourage such behaviour.

At present, there are no restrictions in place to prevent similar scenarios, but if similar cases appear in the future, passengers should be liable for the additional costs, Chen said.

Chen stated that according to international regulations, up until the 33rd week of pregnancy, pregnant passengers do not need airline approval before boarding flights. If flying between the 32nd and 36th week of pregnancy, special medical clearance is required, as well as permission from the airline. For those over 36 weeks pregnant, airlines have the right to refuse travel.

Before boarding an overseas flight on Oct. 7, Jian lied about how long she had been pregnant to airline staff, according to CAL's statement yesterday. Jian delivered her baby on the flight, and the plane diverted to Anchorage to bring the mother and child to a hospital, before the plane continued its journey to Los Angeles.

Controversy heated up after a former flight attendant, surnamed Chen, reportedly claimed Jian repeatedly asked, "Have we reached American airspace yet?" while in labour.

[[nid:230012]]
SUBSCRIBE TO OUR NEWSLETTER
Your daily good stuff - AsiaOne stories delivered straight to your inbox