The Muslim Council of Hong Kong has appealed for calm, saying the city's biggest mosque was not police's intended target when their water cannons sprayed its entrance with blue dye on Sunday.

The faith group urged Hongkongers not to seek revenge over the "sensitive incident" outside Kowloon Mosque on Nathan Road, the main thoroughfare running through Tsim Sha Tsui and Mong Kok, and the epicentre of Sunday night's violent unrest, as it praised both officers and residents for helping to clean the religious site afterwards.

A statement, posted on the council's Facebook page late on Sunday, said it was satisfied the mosque was not a police target during a dispersal operation, adding: "[The incident] has undoubtedly stirred feelings among the Muslim and non-Muslim communities in Hong Kong but let us not make the situation worse."

It added: "Let's seek calmness over revenge, wisdom over emotions and unity over division."

The message was later replaced with a shorter post, which read: "Honestly, we the Muslim community are truly thankful to all the heartwarming people of Hong Kong who came to clean the gates of Kowloon Mosque today after the blue spray incident." 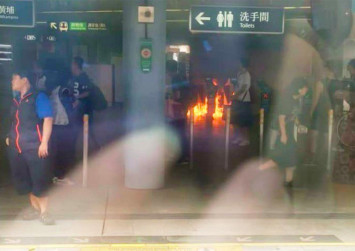 For several days leading up to the weekend, ethnic ­minority groups in Hong Kong were on edge, as fears grew of possible reprisals after a protest leader was attacked for a second time by men said to be of South Asian ­descent.

But on Sunday, they did not encounter any violence as volunteers came out by the dozen to look out for ethnic minority groups at their favourite shopping centre, Chungking Mansions, and the nearby mosque in Kowloon.

As volunteers handed out water bottles to protesters and passers-by at the mall, however, further down the road, the mosque found its gates covered in blue dye after a passing police water cannon sprayed it with the solution.

Police reacted quickly to the mosque incident, posting on the force's Facebook page that the water cannon had "accidentally affected the entrance and front gate of the mosque" during a dispersal operation.

"The police have immediately contacted the chief imam as well as Muslim community leaders to clarify the situation and to show our concern," the statement read.

The incident prompted mixed reactions within the Islamic community. Muhammad Arshad, the chief iman of Hong Kong, said Muslims would "pray for the peace and security of Hong Kong".

But Muslim businessman Phillip Khan, who along with former Indian Association of Hong Kong president Mohan Chugani, lawmaker Jeremy Tam Man-ho and others was sprayed outside the mosque, said it was a deliberate act and described it as an "insult to the Islamic religion".

On Sunday night, former security minister Regina Ip Lau Suk-yee, a member of the Executive Council, said Chugani was admitted to hospital after being sprayed with the stinging blue dye. She demanded Chief Secretary Matthew Cheung Kin-chung apologise on behalf of the police force.

As a result, resentment against ethnic minority groups had emerged on social media, with some protesters calling for retribution.

In separate statements, Islamic and ethnic minority groups condemned the attack on Sham.

Arshad told the Post on Sunday that the interior of Kowloon Mosque was undamaged when the building was sprayed. He said there would be a routine clean-up at the mosque on Monday.

"[The] mosque was not targeted [by police or protesters]," he said.

"From what I have seen, the mosque was closed and at that time the doors were closed. I think they sprayed water on the people, maybe protesters or press, but in the mosque there is no problem."

The mosque remained open on Sunday, though its gates were closed and visitors were admitted one by one.

Arshad said a group of six or seven people were outside the mosque when it was sprayed.

"We were standing right outside the mosque. There were no protesters when the water cannon fired," said Khan, who was born in Hong Kong to a family from Pakistan.

"I feel outraged. It was a serious insult [towards the Islamic religion] and I demand [Chief Executive] Carrie Lam [Cheng Yuet-ngor] condemn the police actions." 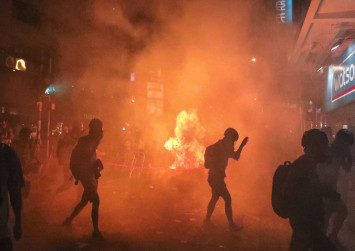 He said he would officially complain to police. Online footage showed the police water cannon truck slowly moving towards the mosque before spraying blue dye at its gates and steps.

Khan had earlier said he intended to run in district council elections in November, at the Tsim Sha Tsui West constituency.

A 29-year-old Muslim who refused to give his name said Muslims felt angry about the mosque spraying.

"It's no good that they sprayed blue dye. I really don't know why they did it when there weren't many people outside the mosque," he said.

Other Muslims outside the mosque said they were not angry over the incident. People walking by, including protesters, helped clean up the religious centre.

In a statement on Sunday, the Civil Human Rights Front accused police of failing to consider that the mosque is a place of worship.

"We regret Hong Kong police's lack of common sense and insensitivity to religion. We ask the police commissioner to give his sincere apologies to the Kowloon Mosque and Islamic Centre, religious communities and Hong Kong society," the statement read.

Earlier on Sunday, most shops in Chungking Mansions were closed with security guards citing potential damage from protests. Kumar Sahuteli, 43, who owns a grocery in the shopping centre and came to Hong Kong from India 26 years ago, closed his shop on Sunday. He said "business was down 50 per cent because of the protests".

"Who would protect my food and groceries if there was an attack on Chungking?" he said.

Some volunteers, including Jeffrey Andrews, a social worker of Indian descent who was born in Hong Kong, called for the ethnic minority community to hand out bottles of water to show solidarity with the protesters.

Andrews, 34, said his team spent several hundred dollars buying water because he wanted to show the positive side of the city's ethnic minority communities.

"We're all Hongkongers and we want to dispel the negative perceptions associated with our community," he said.

Kenny Lau, a retiree in his 60s, stood outside Kowloon Mosque with a sign in Chinese that said "do not disturb the mosque". He said he was there to protect the mosque, claiming "undercover police would vandalise it" and blame it on the protesters.

"Our brothers and sisters know very well to not disturb the mosque," he said.