SINGAPORE  - Muslims in Asia celebrated the Eid-al-Fitr religious holiday on Sunday with prayers for peace as they marked the end of Islam's holy month of Ramadan.

As at the start of Ramadan, during which believers abstain from eating and drinking during daylight hours, Eid-al-Fitr depends on the sighting of the moon and its celebration varies in different countries.

The day begins with early morning prayers and then family visits and feasts.

In Jakarta, the capital of Indonesia, residents said they hoped the spirit of Eid would overcome fears about rising militancy in the country with the largest number of Muslims.

A police officer was killed on Sunday in an attack by suspected Islamist militants in the city of Medan.

Islamic State sympathizers have carried out a series of mostly low-level attacks in Indonesia over the past few years.

"I think we need to go back to the basis of Islam which is to give peace to all mankind," Samsul Arifin told Reuters Television.

In the Philippines, fighting between government forces and Islamist rebels in the southern town of Marawi eased on Sunday as the military sought to enforce a temporary truce to mark the Eid holiday.

Small skirmishes took place early in the day in parts of Marawi, where fighters loyal to Islamic State were clinging on for a fifth week.

Muslims attended prayers at a Marawi mosque in an emotional gathering. The fighting has displaced some 246,000 people, and killed more than 350 people, most of them rebels, and about 69 members of the security forces.

Read Also
7 things you need to know about the fasting month, Ramadan 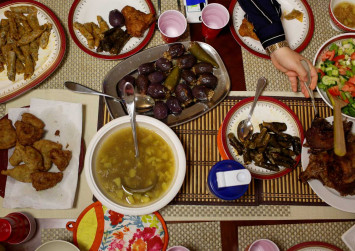 "This is the most painful, the most sorrowful occasion, Eid al-Fitr, that we have experienced for the last hundreds of years," said Zia Alonto Adiong, a spokesman for the provincial crisis committee.

In Malaysia, the civil war in Yemen was on the minds of two refugees who prayed at the main mosque in the capital Kuala Lumpur.

Sisters Sumayah and Nabila Ali said they sought refuge in Malaysia after fleeing Yemen where more than 10,000 people have died in two years of conflict.

"When we say poor people, children who are not safe, are always in danger, we hope that one day it will be safe again and people will be happy again. Inshallah," said 28-year-old Sumayah.