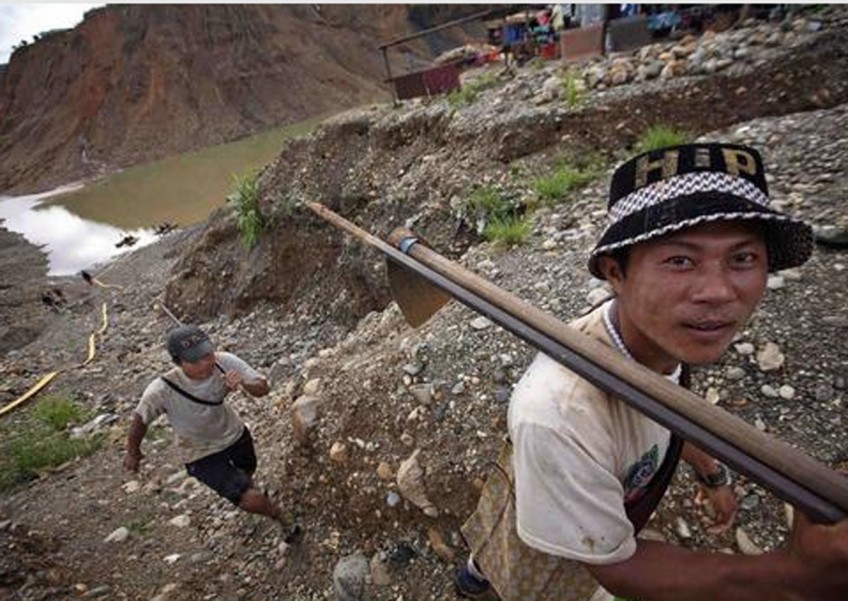 Hand-pickers return from searching for jade through rubble dumped by mining companies at a jade mine in Hpakant township, Kachin State, Myanmar on July 7, 2013.
Reuters

Jade is driving conflict between the government and ethnic Kachin rebels, funding both sides in a war that has killed thousands of people and displaced 100,000 since 2011, the London-based organisation said in a 128-page report.

Kachin's Hpakant township has been stripped of forests, as two-storey-tall machines and dynamite take just four days to plough through jade-bearing mountains that once took 30 days to mine, leaving a "moonscape" of waste-filled craters prone to collapse, it said.

The loss of land, pollution and takeover of the jade industry by government-licensed companies have destroyed traditional sources of income - farming and small-scale mining - and stoked resentment in a volatile region, it said.

"Locals are literally having the ground cut from under their feet. There is a parallel social collapse involving endemic drug addiction amongst miners, prostitution and gambling," Mike Davis, Asia director for Global Witness, told the Thomson Reuters Foundation in an email from Yangon.

Those who "stand in the way of the guns and machines" face land grabs, intimidation and violence, the report said, quoting one woman as saying her home was destroyed after she refused to move out in exchange for 1 million kyat (S$1,086.75) compensation.

"The environmental and social collapse of Hpakant, and the plunder of its riches, fuels intense resentment amongst Kachin people," Davis said. "As some say, 'The tree is in our garden but we are not allowed to eat the fruit.' Kachins can do little more than stand by and watch their long-time enemies consume their natural inheritance. This exacerbates locals' distrust and the determination of some to resist central government control."

Companies named in the report did not immediately respond to requests from the Thomson Reuters Foundation for comment on it.

The Global Witness analysis, which details the military and ruling families, drug lords and companies benefiting from jade, valued Myanmar's jade production in 2014 at as much as US$31 billion (S$43 billion) - equivalent to 48 percent of Myanmar's GDP - and up to US$122 billion over the decade through 2014.

Myanmar's many tariffs include a 20 percent value-based tax on jade at mine sites and 10 percent on sales at government jade sales, but Global Witness estimates the state received less than US$374 million in official jade revenues in 2014 - less than 2 percent of the US$31 billion estimated output value.

A Mines Ministry official, asked to comment on the report, told the Thomson Reuters Foundation his ministry transferred all tax revenue from the mines to the Finance Ministry. "Then the Ministry of Finance would allocate budgets to the states and regions." Over the years, tens of thousands of people across the country have come to Kachin state to mine jade but have had slim pickings, illegally combing through company waste.

One jade scavenger who trespassed onto company property was found murdered and dismembered, the report said.

The mining - which feeds neighbouring China's appetite for the "stone of heaven" - has left a deadly wasteland.

In April 2015, a "torrent of liquid mud" burst through the edge of a crater, engulfing machines and operators, killing between 30 and 60 people, local residents told Global Witness. The mining company said the death toll was 11, the report said.

The jade funding both sides in the war creates incentives for military commanders and government hardliners to prolong the conflict and protect assets they could lose if the jade business became more open and fair, the report said.

Global Witness said the question of who manages and benefits from Kachin state's jade must be built into a peace agreement to end the conflict.

It urged Myanmar and mining companies to work toward transparency and fairness, publishing data on licences, bidding, concessions, revenues and ownership.

It pressed donors to make funding for Myanmar, as well as the lifting of sanctions by the United States, contingent on jade industry reforms.