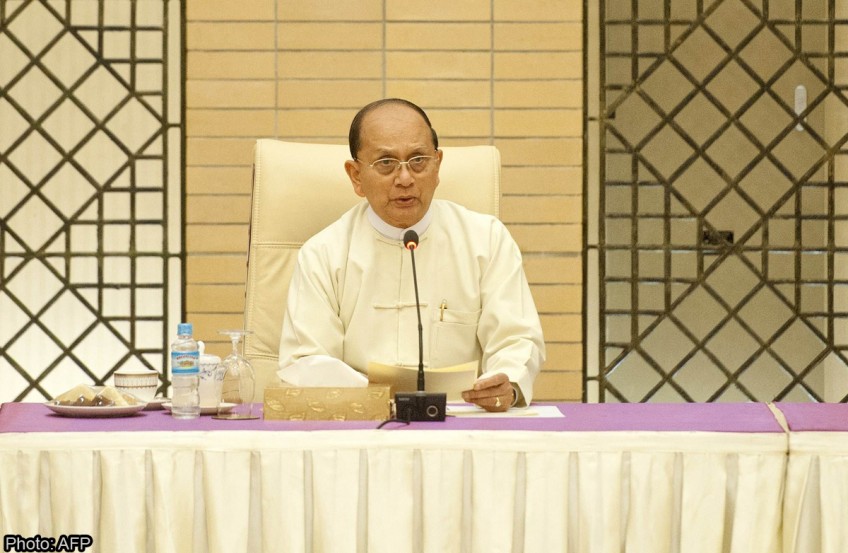 YANGON - Myanmar's military will maintain its role in politics in order to support a transition to democracy but will eventually submit to civilian rule, President Thein Sein said in an interview broadcast on Friday.

Myanmar was ruled by the military for 49 years before a semi-civilian government took power in 2011 and initiated widespread political and economic reforms.

But under a 2008 constitution drafted under military rule, a quarter of parliamentary seats are reserved for unelected serving officers, along with some key cabinet posts, giving the military an effective veto on any constitutional reform.

The opposition National League for Democracy party, led by Nobel laureate Aung San Suu Kyi, has called for the military to step away from politics.

Thein Sein, a former general, said the military initiated the reform process and still needed to play a political role in order to support the transition to democracy.

"In fact, the military is the one who is assisting in the flourishing of democracy in our country," he told the BBC.

"As the political parties mature in their political norms and practice, the role of the military gradually changes."

Thein Sein did not say when the military would transition out of politics, but said it would be done according to the"will of the people".

Parliamentary elections are scheduled for early November, and the parliament that emerges from the vote will choose the next president.

Suu Kyi's party swept a 1990 vote that the ruling generals ignored, and she remains hugely popular but the military-drafted constitution bars her from the presidency because she has two sons with British citizenship. Her late husband was a British academic.

Thein Sein denied that the clause was written in order to exclude Suu Kyi from the presidency, and said the requirement was actually drafted in 1947 when the country, also known as Burma, was preparing for independence from Britain.

Thien Sein said he was not opposed to changing the constitution, but said it would be up to parliament to support an amendment, which would then require a referendum.

Such an amendment would require more than 75 per cent approval in a parliament dominated by military representatives and their allies in the ruling United Solidarity and Development Party, which is made up mainly of former officers.