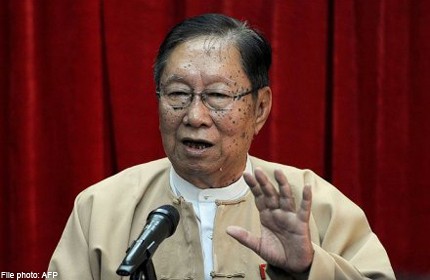 YANGON - Myanmar's opposition spokesman said Thursday he had been fined for a statement he made claiming that ballot sheets were tampered with in landmark by-elections that saw Aung San Suu Kyi's party enter parliament last year.

Nyan Win, who is also the lawyer for democracy champion Suu Kyi, said a court in the capital Naypyidaw had given him a choice of paying 1,000 kyats (about S$1) or spending a month in prison after the verdict. He added that he had chosen the fine.

Last year Nyan Win complained that a thin layer of wax had been put over check boxes for candidates of his National League for Democracy (NLD) party, meaning that marks made on the wax could later be rubbed off to cancel the vote.

The claim was roundly denied by the country's Election Commission, which submitted a complaint about the allegation to the Naypyidaw court.

Nyan Win was convicted under Section 182 of the penal code, which makes it an offence to give false information to a public servant.

Suu Kyi's party went on to win 43 of the 44 constituencies where it fielded candidates, giving Suu Kyi her first ever seat in parliament.

The authorities have said a subsequent investigation by the Election Commission found no evidence of ballot tampering.

A 2010 general election, won by the military's political proxies, was marred by widespread complaints of cheating and the exclusion of Suu Kyi. She was released from seven straight years of house arrest shortly afterwards.

Since then, the new quasi-civilian government has pursued a series of dramatic political reforms that have been praised by the international community and have seen most western sanctions scrapped.