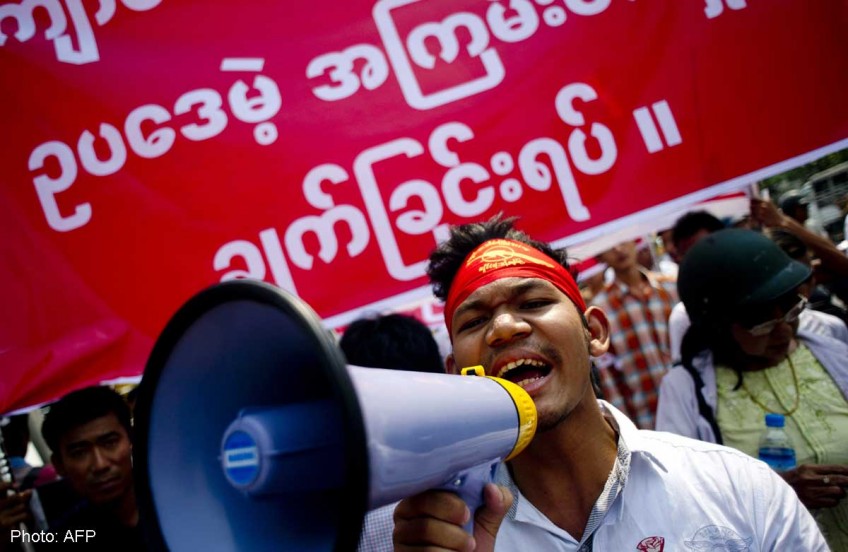 A Myanmar activist shouts slogans during a rally to protest against the crackdown by police on recent student-led protests, in Mandalay on March 21, 2015.

THARRAWADDY , Myanmar - Dozens of Myanmar activists arrived at court for a hearing in the central town of Letpadan Wednesday after they were arrested in a police crackdown on a student-led protest that sparked international alarm.

Around 80 demonstrators remain in custody more than two weeks after baton-wielding police brought a violent end to the rally calling for education reform, in violent scenes drawing criticism that the nation was reverting to repressive tactics seen under military rule.

Three trucks carrying the detainees left Tharrawaddy prison, near Letpadan, for the court Wednesday morning with activists singing loudly and waving through the bars at cheering family members gathered outside.

But there were angry scenes outside the court in Letpadan later as some relatives were stopped from entering the compound.

More than 100 demonstrators were arrested after the March 10 rally, with the state-backed Global New Light of Myanmar reporting on Wednesday that 19 men and one woman had been "turned over to their parents and relatives" the previous day.

"The authorities have so far released 28 students and two reporters arrested in the crackdown after determining their roles in the protests," it said.

Worried relatives, who have had only fleeting contact with their loved ones, claim activists have been mistreated in prison and have little information about the legal action they face.

"My daughter still doesn't know what kind of charges have been pressed against them. They haven't been told anything clearly yet," said Ne Win, adding that his daughter Phyo Phyo Aung was beaten around the head "about six times" after being arrested.

Myanmar authorities, who have yet to release exact details of the case against the activists, were unavailable for comment.

Lawyer San Tun Aung -- among the crowd of relatives, journalists and activists that had gathered outside Tharrawaddy prison -- said around 45 barristers from Mandalay and Yangon had offered to represent the detained protesters.

"Arresting them is like destroying democracy, that is why we lawyers have to represent them," he said.

Observers fear Myanmar's much-lauded reforms are stalling as the country lurches towards a landmark election later this year.

Students have long been at the forefront of political action in the former military-run nation's turbulent history, leading mass protests in 1988 that saw the rise of Aung San Suu Kyi and her party but which were brutally quashed by the military.

The protest crackdown in Letpadan came just days after police broke up a student rally in Yangon, helped by men in civilian clothes, in moves that Suu Kyi's opposition party said echoed tactics under the former junta.

The European Union, which has run programmes to train Myanmar's decrepit police force, has voiced concern at the crackdowns, while the United States and United Nations also expressed alarm.

Students have rallied in Myanmar for months against education legislation, calling for changes to a new law, including decentralising the school system, allowing student unions and teaching ethnic minority languages.

Talks between the government and the young activists had led to a rethink of the legislation by parliament, which is currently debating proposed changes.

But authorities had expressed determination to stop a march from Mandalay in central Myanmar to Yangon, which began in January.

State media has announced an inquiry into the crackdown in Yangon and whether security forces "acted properly in dispersing the protesters", with findings to be submitted to the president by March 31.