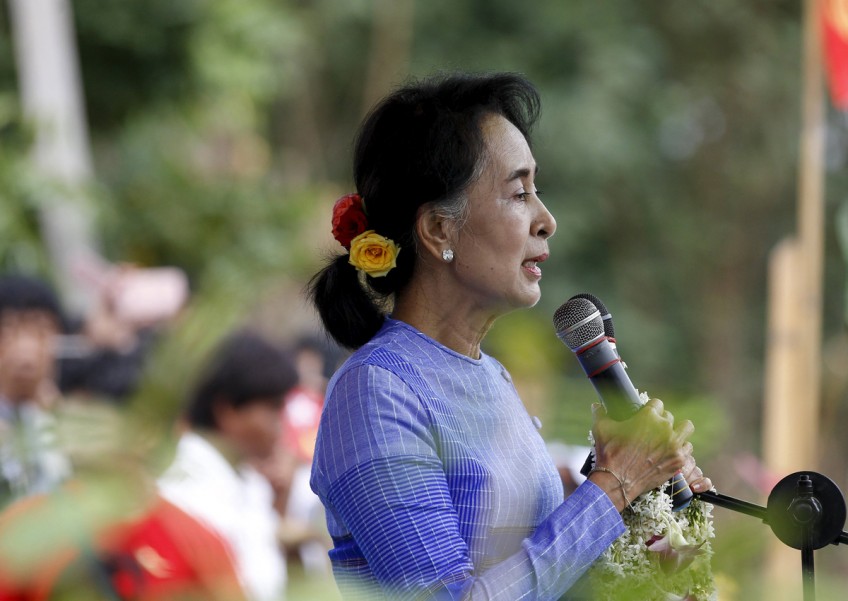 YANGON - Myanmar opposition leader Aung San Suu Kyi was touring her constituency on the outskirts of Myanmar's commercial capital of Yangon on Monday, kicking off the third week of campaigning for the first free national vote in 25 years.

In the run-up to the Nov.8 poll, Suu Kyi's National League for Democracy has pledged to speed democratic reform, scrutinize investment to limit environmental impacts and amend a junta-drafted constitution that bars her from becoming president.

President Thein Sein's ruling Union Solidarity and Development Party responded with a message on his Facebook page, flaunting incoming investment, economic growth and reforms carried out by his military-backed government, which took power in 2011.

The election marks a major shift in Myanmar's political landscape, giving a platform to democratic activists crushed during a half-century of military rule that ended that year.

Suu Kyi is to meet thousands of supporters in Kawhmu, an impoverished, rice-growing area near Yangon, with an estimated 80,000 registered voters. She will also deliver a 15-minute address on the state-owned television channel later in the day.

The charismatic Nobel Peace Prize laureate faces four opponents from the ruling bloc and smaller opposition parties in Kawhmu, but is expected to win in a landslide.

Suu Kyi, who led the struggle against military rule in the former Burma for two decades, was elected from the constituency among 43 NLD candidates who ran in the byelection in 2012.

That win marked a turning point in Myanmar's politics, paving the way for her party to fight the Nov. 8 poll and transforming Suu Kyi from a democracy campaigner into an active politician in charge of Myanmar's largest party.

The NLD won an election in 1990 with a landslide, but the junta did not recognise the result.

Though the party is expected to win most seats in the upcoming election, there are no guarantees it will lead the executive.

The president, who is chosen in a parliamentary vote that includes the military, chooses his or her own cabinet, not necessarily from among political parties.