Myanmar's transition to democracy hinges on the military 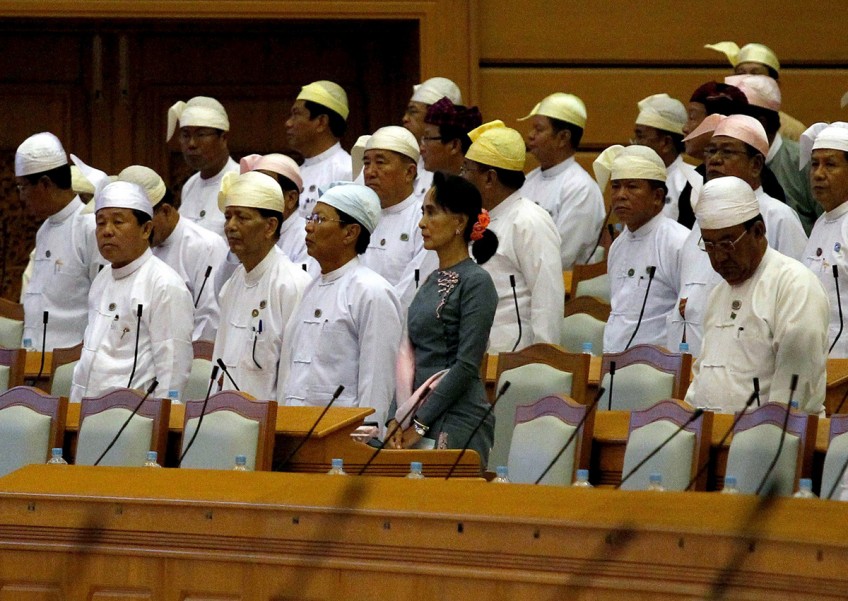 Aung San Suu Kyi has power in her sights after a quarter century of democratic struggle against the army, but analysts say building bridges with former military foes is vital to her success.
Reuters

WIELDING an overwhelming mandate from Myanmar's voters, Aung San Suu Kyi has power in her sights after a quarter century of democratic struggle against the army, but analysts say building bridges with former military foes is vital to her success.

A resounding victory for Ms Suu Kyi and her National League for Democracy (NLD) sets the stage for a radical rebalancing of power in Myanmar, dominated for generations by repressive and economically ruinous military rule.

In a sign of the deep craving for change in the nation, voters handed the party 80 per cent of elected seats in the national legislature.

The result sends a "strong signal to the military that the writing is on the wall and your domination is coming to an end", said political analyst Khin Zaw Win.

Ms Suu Kyi was locked up for 15 years by paranoid generals fearful of the democracy campaigner's enormous popularity.

But to rule, she will have to foster a relationship with the country's military elites, who continue to hold significant political and economic power, despite reforms under a quasi-civilian regime that replaced junta rule in 2011.

Observers predict tremulous times ahead for the Nobel laureate, with some four months before an NLD-led government can take the reins under Myanmar's complex political system.

Burned into public memory is the bitter disappointment of 1990 elections, which were won overwhelmingly by the NLD only to be ignored by the military, who clung to power for another two decades.

So far the signs are positive, according to Dr Khin Zaw Win, who said the NLD had a "once in a century" chance to steer Myanmar towards a brighter future.

Ms Suu Kyi, 70, has taken a conciliatory approach, declining to make a victory speech and seeking talks with President Thein Sein and army chief Min Aung Hlaing, due to go ahead in the coming days.

The army have sought to reassure Myanmar's nervous citizens, indicating a willingness to work with their foes in the NLD, who will flood into the capital Napyidaw in February when a new Parliament session opens.

That new Parliament will still have a quarter of its seats reserved for unelected soldiers under the junta-drafted constitution, while the military also retains control of key security ministries.

But there will also be scores of fledgling NLD lawmakers whose previous occupations as poets, hip-hop stars, political prisoners and doctors have earned them public respect but little legislative experience.

Dr Khin Zaw Win urged the NLD to accept a wide spectrum of advice as it finds its feet.

"The NLD has overachieved in the election but there is a strong chance it will underachieve in government unless it takes (these) necessary steps," he said.

Despite carrying the flame of hope from the Myanmar electorate, Ms Suu Kyi is barred from the presidency by a constitution that many believe was scripted especially to block her path to power.

She cannot take the post under the charter because she married and had children with a foreigner.

The Nobel laureate has pledged to circumvent this by ruling "above the president", a legally uncertain position that has not been fully explained and might echo the role of India's Italian-born Sonia Gandhi. But it could put her on a collision course with the army.

"There is no constitutional way she can formally be above the president," said Richard Horsey, an independent Myanmar analyst, adding the head of state would need sufficient stature to wield the "enormous executive power" engendered in the role.

Despite the election drubbing, Mr Horsey said, the military were the "architects of this transition" and were still steering its course.

With several ongoing ethnic minority civil wars and long borders with the world's most populous nations, "the military in this country is not going anywhere", he said.