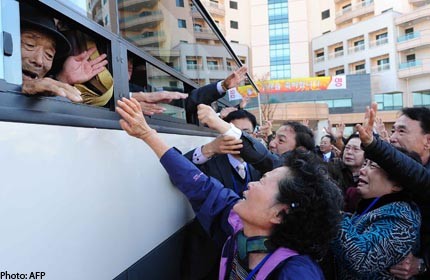 This file photo taken on November 1, 2010 shows North Koreans (on bus) waving to their South Korean relatives as they bid farewell following their three-day separated family reunion meeting in the North.

SEOUL - North Korea said Sunday it has agreed to South Korea's proposal to resume reunions for families separated since the 1950-53 war, in another apparent sign of easing tensions.

The North has agreed to hold the event during the traditional Chuseok holiday that falls on September 19 as suggested by the South, Pyongyang's Committee for the Peaceful Reunification of Korea said in a statement on official media.

It also proposed another round of indirect family reunions via video conference around October 4 - the anniversary of the 2007 inter-Korean summit, said the statement on the North's official Korean Central News Agency.

The move came days after the South's President Park Geun-Hye last Thursday urged Pyongyang to "open its heart" and agree to hold the first family reunions since 2010.

Officials of the Red Cross from both sides will hold a meeting on August 23 as proposed by Seoul to discuss details, the North said, suggesting the Mount Kumgang resort in the North as the venue for the talks.

"Now is the time for the north and the south to make joint efforts for the improvement of the north-south ties and peace and common prosperity on the Korean peninsula," said the statement. Ties have improved recently after months of high tensions. Last week the two sides agreed to work on reopening the Kaesong joint industrial zone shut down in April.

The North also proposed Sunday a separate meeting on August 22 to discuss reopening the Kumgang mountain resort, and promised to discuss Seoul's key concerns including ensuring the safety of tourists.

Kumgang was the first major inter-Korean cooperation project, and thousands of South Koreans visited the Seoul-funded resort in the North between 1998 and 2008.

The South suspended the tours after a North Korean soldier shot dead a tourist who strayed into a restricted zone.

"The resumption of the tours...will bring bigger joy to all the Koreans," the statement said.