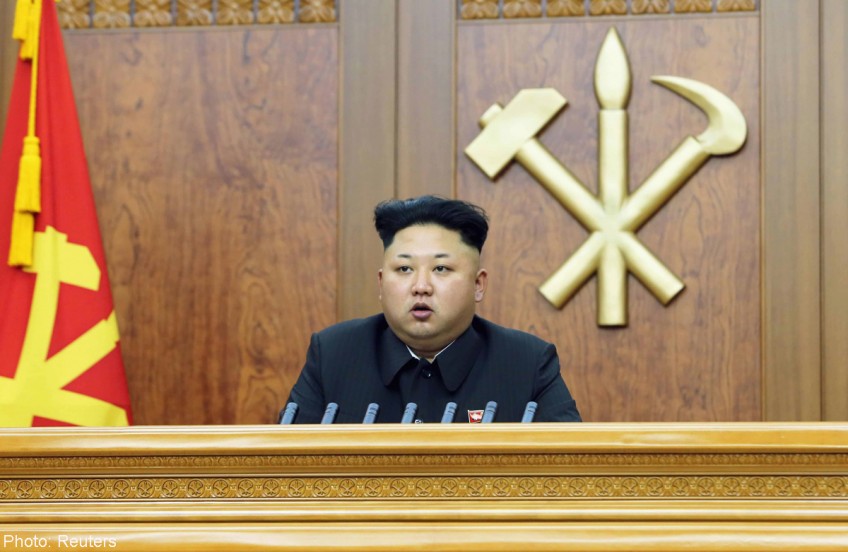 North Korea appears to have set out to step up its peace offensive since its leader Kim Jong-un displayed his willingness to hold a summit with South Korea and put cross-border relations back on track in his New Year address.

State media on Friday churned out articles and editorials backing up the young ruler's speech, in which he said talks could reopen even at the highest level "if Seoul truly seeks to improve relations through dialogue" and "the atmosphere and environment are ready."

Uriminzokkiri, a North Korea propaganda website, ran op-eds by officials in charge of inter-Korean affairs vowing efforts to bring about reconciliation and reintegration with Seoul.

"There is nothing that can't be done if we join hands and fight together among our people," wrote Kim Yong-il, an official at the North's Committee for Peaceful Reunification of Korea. "I will put my utmost efforts into tasks to improve North-South relations and realize a national reconciliation and unity."

Ri Hyok-gwang, an official at the Central Committee for Fatherland Reunification and Democracy Front, stressed in his own piece that the two Koreas would achieve a "turnaround only if they have right perspectives and understanding toward each other and create the necessary atmosphere and environment."

Pyongyang Broadcasting Station said that the leader's message provided "clear directions and methods" for reunification, while calling for a stop to the "dangers of war," such as military drills by South Korea and the US

"There cannot be sincere dialogue and improvement in inter-Korean relations in a warlike atmosphere where rehearsals of war take place that deny the other side," the radio station said.

The intensified conciliatory signals reflect the communist country's efforts to defuse mounting international pressure over its nuclear programs and more recently grave human rights situations and purported hacking of Sony Pictures over "The Interview," a film about a plot to assassinate Kim Jong-un.

President Park Geun-hye, for her part, vowed to make "substantive preparations" to help bring forward a unification ahead of the 70th anniversary of the peninsula's liberation and division at a meeting with some 190 political leaders and top officials at Cheong Wa Dae.

Earlier in the day, she was expected to swap related views during a phone conversation with UN Secretary-General Ban Ki-moon. Ban expressed hopes for a recovery of the mood for inter-Korean dialogue and reconciliation in his own New Year address.

Observers are raising cautious optimism as the conservative president pledged to step up efforts to help lay the foundation for unification this year. With her presidency entering its third year, the prospects appear to be more upbeat than last year, when Kim launched a similar peace offensive following his New Year speech but was met with aloofness from Seoul in the wake of the execution of Jang Song-thaek, Kim's uncle and former vice chairman of the powerful National Defense Commission.

Seoul welcomed the latest overture, which came just days after Unification Minister Ryoo Kihl-jae proposed a high-level meeting this month to discuss a reunion of families displaced by the 1950-53 Korean War and other issues of "mutual concern."

"The focal point is how to resolve the separated families issues," a ranking Seoul official told reporters on customary condition of anonymity.

"It is important to meet and talk regardless of the formation of dialogue. … We're willing to put anything on the agenda including political and military concerns."