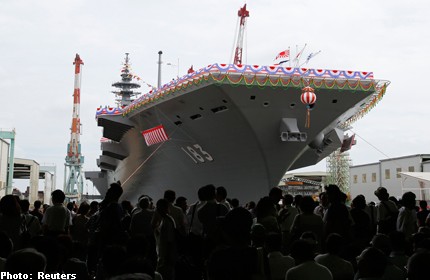 SEOUL - A day after Japan unveiled its largest warship since World War II, North Korea warned on Wednesday that Tokyo was following a militarisation programme that had already crossed "the danger line".

"This is nothing but a broad hoax by Japan to justify its moves to turn it into a military giant which have gone beyond the danger line," KCNA said.

The commentary argued that "loudmouth" warnings about the missile and nuclear threat from North Korea were aimed at diverting international attention from efforts by Shinzo Abe's conservative government to ditch Japan's pacifist constitution.

"Japan's assertions are too unreasonable and illogical to justify its sinister aim," the agency said.

"Japan would be well advised to behave with reason, aware that to do so would be beneficial to its security," it warned.

The KCNA commentary was released a day after Japan unveiled a S$1.56 billion helicopter carrier aimed at defending its territorial claims following maritime skirmishes with China.

Japan's well-funded and well-equipped military is referred to as the Self-Defence Forces, and is barred from taking aggressive action. Any move to beef up the military would require constitutional change.

[[nid:33208]]
SUBSCRIBE TO OUR NEWSLETTER
Your daily good stuff - AsiaOne stories delivered straight to your inbox