N. Korea silent on return of US remains

North Korea remained mum on Sunday on its return of the remains of American soldiers killed during the 1950-53 Korean War, but it is in fact sending a silent message to the US to swiftly declare mark an official end of war, experts say.

In a move that is seen as the first tangible result from the Singapore summit in June, North Korea repatriated 55 sets of remains of US soldiers Friday, which prompted a note of thanks from US President Donald Trump to North Korean leader Kim Jong-un via Twitter.

But Pyongyang had yet to release statements on Friday's repatriation of the war dead through state media, or a response to Trump's message. Soldiers carry caskets containing remains of U.S. soldiers who were killed in the Korean War during a ceremony at Osan Air Base in Pyeongtaek on July 27, 2018.Photo: AFP

"It is currently silent because it knows that the US is fully aware of its calls for a declaration of the end of the Korean War and sees it as a matter so obvious that it requires no announcement," said Shin Beom-chul, a senior researcher at the Asan Institute for Policy Studies.

"It is implementing what was agreed at the Singapore summit between Trump and Kim in June."

Shin's remark suggests that Trump is now being pressured by the North to deliver more than a message of gratitude: a practical step and solid response with regards to an official end to the state of war. The North has been calling the declaration the "first process for peace" and a way the US can offer the regime a security guarantee. 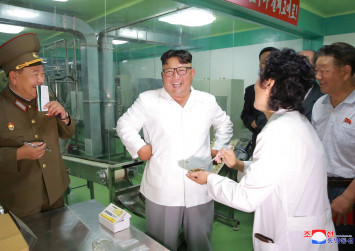 There has been a perceived lack of progress in US-North Korea denuclearization talks lately over what is believed to be conflicting views on ending the Korean War.

Following high-level talks with US Secretary of State Mike Pompeo in Pyongyang earlier this month, the North's Foreign Ministry expressed dismay over Washington's delay in making the declaration.

"With the repatriation of remains of US soldiers, the process will now move toward officially reviving negotiations for denuclearization of the Korean Peninsula," said Koh Yu-hwan, a professor at Dongguk University in Seoul, pointing out that the return of the remains was part of an effort to build mutual trust between the two countries.

"The US has to address the rest of the clauses inked in the agreement reached between Trump and Kim in June," he added.

Regarding brewing concerns that North Korea will use the return of the war dead as a bargaining chip in achieving its goals -- it only returned a portion of what was expected -- Shin said that 55 sets were probably what the North could prepare at the moment. The rest of the recovery project is likely to be carried out jointly with the US, recalling the 1996-2005 US-North Korea recovery operations that collected 229 sets of the US remains, the Seoul-based expert added. 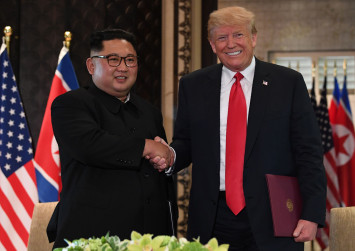 Despite the recent steps taken by North Korea to prove its willingness to denuclearize, analysts say it is crucial for Trump to convince those in Washington who fear signing a peace deal first could dissipate the international pressure they believe pushed Kim to dialogue. It could also affect the decadeslong South Korea-US military alliance, and may undermine the justification for US troops based on the peninsula, they claim.

North Korea has also recently started dismantling Sohae satellite launching station, according to US-based monitoring website 38 North, in what appears to be a step towards fulfilling commitment made by Trump and Kim. Sohae has served as the North's main rocket launch site since 2012.

The Korean War ended in an armistice rather than a peace treaty, leaving the US-led United Nations forces technically at war with North Korea.