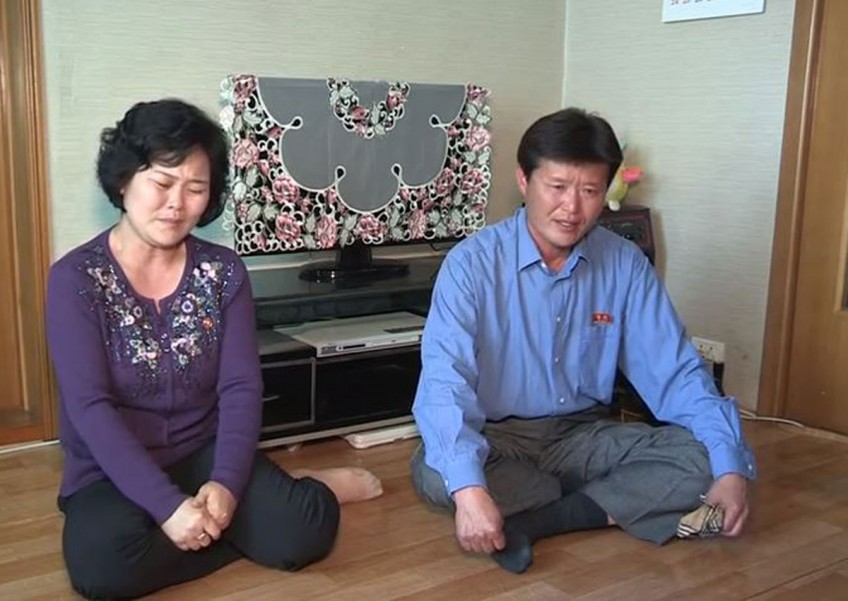 The parents wept and demanded the South return their daughter, So Gyong-A.
Youtube

North Korea has released a video appeal by the parents of one of 12 waitresses that Pyongyang insists were kidnapped by South Korean agents from the restaurant where they were working in China.

In the footage, uploaded Wednesday to the North's propaganda website Uriminzokkiri, the parents wept and demanded the South return their daughter, So Gyong-A.

So and 11 other waitresses from the same restaurant arrived in South Korea earlier this month, along with their manager.

North Korea claims the manager tricked them into defecting and that they were effectively abducted with the collusion of the South's spy agency.

Seoul insists they all defected voluntarily.

In the video, So's father So Dae-Song lashed out at South Korean President Park Geun-Hye "and her clique who lured and kidnapped" his daughter.

"Gyong-A, resist strongly until you return to the bosom of our Marshal" he cried out, referring to leader Kim Jong-Un.

Gyong-A's mother also wept and denounced Park as a "devil".

Titled "Interview with families of kidnapped girls", the video had a serial number one - an indication that the North will possibly upload similar videos with other parents in the future.

Last week, the North proposed sending all the parents to Seoul to meet their daughters and expose the "fiction" that they had escaped to South Korea voluntarily.

Nearly 30,000 North Koreans have fled poverty and repression at home to settle in the capitalist South.

But group defections are rare, especially by staff who work in the North Korea-themed restaurants overseas that are a key source of hard currency for the regime in Pyongyang.

They are generally handpicked from families that are "loyal" to the regime and go through extensive ideological training before being sent abroad.

Anyone caught fleeing the country can be subject to harsh punishment, as can the families of those who successfully defect.

Relatives are often featured in state propaganda, either making tearful pleas for defectors to return home or berating them for betraying the motherland.