A fireworks display lights up the sky above Victoria Harbour in Hong Kong on National Day in 2018.

The annual National Day fireworks originally expected to take place on October 1 will be cancelled because of the ongoing civil unrest, Hong Kong's government announced on Wednesday.

In a statement, the Leisure and Cultural Services Department said the decision was made "in view of the latest situation and having regard to public safety".

It came after a source told the Post last week that the government had decided to cancel the event out of safety considerations, despite this year being the 70th anniversary of the People's Republic of China.

Hundreds of Hong Kong dignitaries, including embattled leader Carrie Lam Cheng Yuet-ngor, are expected to attend a grand celebration in Beijing on October 1.

Since Hong Kong was returned from British rule in 1997, the display has brought about 300,000 residents and tourists to both sides of Victoria Harbour each year for the visual experience.

He put hotel occupancy rates last month at 60 per cent, down from 90 per cent for the same month last year.

Yiu said the cancellation was yet more bad news for the tourism industry, as travel agents, as well as restaurants and hotels on both sides of the harbour, were the major beneficiaries of the annual display. 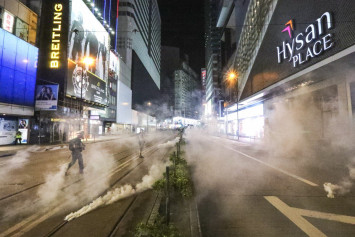 "Now the show will be cancelled, the itineraries of the boat trips have to change, and discounts have to be offered for those meals."

He said travel agents that specialised in organising tours and boat trips for locals would be hit harder by the cancellation.

Both Yiu and Wong agreed that the government had little choice when it came to public safety.

Lau Siu-kai, vice-chairman of semi-official think tank The Chinese Association of Hong Kong and Macau Studies, also believes state leaders in Beijing would rather allow the Hong Kong government to cancel the show, than to risk having a situation in the city that would embarrass them.

"Unless something major happens in Hong Kong on October 1, all eyes will be on the celebrations and military parade at the Chinese capital on that day," he said.

In 2009, different government departments worked with district councils in organising a series of events from September to November to celebrate the republic's 60th anniversary.

Those events included parades from September to early October in at least seven of Hong Kong's 18 districts, and a carnival in Sai Kung.

In 2014, apart from the annual flag-raising ceremony, reception, fireworks and a cultural show, the Home Affairs Department also organised a carnival, called "National Day Extravaganza" at Victoria Park on October 1.

But this year, apart from a history exhibition from July to August, there has been no announcement about any official parade, carnival or concert to commemorate the 70th anniversary of the republic.

Asked if any other National Day activities would be cancelled, a government spokesman would only say details of those events would be announced soon.