Nearly a fifth of Hong Kong voters say they support violent actions by protesters, such as attacking opponents or hurling petrol bombs and bricks

Nearly a fifth of Hong Kong voters support protesters "attacking opponents", hurling bricks and petrol bombs and damaging public facilities such as the MTR, a poll commissioned by the Post has found.

The findings of the survey, which asked voters for their views on the protesters' range of tactics among other questions, suggested Hongkongers had a threshold of the level of violence they would tolerate.

There appeared to be a baseline of 5 per cent of voters who said they "strongly support" more violent actions such as attacking opponents, hurling bricks and petrol bombs and damaging public facilities.

Another 13 per cent or so said they "somewhat support" such actions.

But across the board, there was a bigger group that was supportive of milder actions such as vandalising businesses with links to mainland China, blocking MTR stations and blocking roads.

Of 832 surveyed, 54 per cent said they voted for a pro-democracy candidate during the November 24 district council polls, while the rest said they supported a pro-government candidate or an independent.

Those who said they did not vote were screened out and not included in the results.

The online survey was conducted not from a universal sample but a panel composed of 150,000 people in Hong Kong from all walks of life.

The reported findings have been weighted by age and sex to better align with the 2019 registered voter statistics.

The survey was conducted as the protests passed the six-month mark earlier in December.

The movement, which began in opposition to an extradition bill which has since been withdrawn, has morphed into a wider anti-government protest calling for greater democracy and police accountability.

Among seven tactics used by the demonstrators over the past months, the most acceptable, according to the poll, was the use of laser pointers against the police, which 58 per cent of pro-democracy voters supported.

Only 14 per cent of pro-establishment voters supported such actions.

Close to half of pro-democracy voters also said they supported non-violent protest acts such as the blocking of MTR trains and major roads.

The least supported act was attacking opponents who hold different political views, which 18 per cent of those surveyed supported, with 5 per cent strongly supporting such actions and the remaining 13 per cent somewhat supportive of it.

While 30 per cent of those who voted for the pro-democracy camp said they supported such attacks, only 8 per cent of pro-government voters felt the same way.

Since June, about 10 pro-democracy election candidates and protest organisers have been physically attacked, including Civil Human Rights Front convenor Jimmy Sham Tsz-kit, who was assaulted by a group wielding hammers. 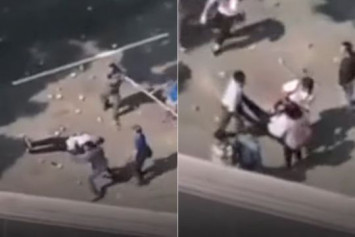 Pro-establishment legislator Junius Ho Kwan-yiu was attacked with a knife while campaigning for the district council election.

There was also violence among non-politicians.

A 57-year-old man was set on fire in November, suffering severe burns, after chasing protesters who had vandalised a railway station in Ma On Shan.

A cleaner, 70, who was taking pictures of black-clad protesters, died after he was hit with a brick.

A student, 19, who was distributing leaflets in support of the protests in Tai Po in October was stabbed by a mainland Chinese man in the neck and stomach.

Survey respondents split similarly on the question of petrol bombs and bricks, 18 per cent saying they supported protesters throwing the projectiles, again with 5 per cent strongly supporting such violence and the remaining 13 per cent somewhat supportive of it.

Among pro-democracy voters, 31 per cent accepted such acts, while only 7 per cent of those who voted pro-government or non-partisan shared the view.

"Because of the government's inaction and lack of response to the public's demands, people now support, empathise with and accept these protest means," Ng said.

"I don't find it surprising."

Ng said some of the life-threatening attacks were "tragedies", but warned more could happen if the government did not proactively mend the rifts in society.

Among both groups, pro-democracy voters supported the acts in greater numbers than those from the other camps.

Political scientist Dr Edmund Cheng Wai of City University said protesters, riding on public support, had been "pushing the limits" over the past six months as they interacted with the police.

He believed members of the public tended to be more upset with vandalism of public property as they could not see how the institutions affected - such as universities - had barred the protesters from achieving their goals.