The bodies of nine climbers killed on Nepal's Mount Gurja were retrieved Sunday as rescuers tried to piece together what led to the freak accident, the deadliest to hit the Himalayan nation's mountaineering industry in recent years.

Rescuers found the bodies of the South Korean climbing expedition scattered across the base camp amid the broken remains of their tents and equipment.

The team had injuries, including head wounds and broken bones, consistent with being hit by strong winds, but rescuers say it most likely caused by the powerful downblast from an avalanche, not a storm.

"It seems that seracs (glacial ice) and snow fell from high on the mountain and the strong gusts of winds from that hit the campsite, throwing the climbers off," said rescuer Suraj Paudyal who reached the site Sunday.

The remote camp at around 3,500 metres was located next to a gully that acted as a funnel for the mass of snow, ice and rocks brought down by the avalanche creating a powerful kickback of wind that decimated the team.

"The terrain is very challenging and it was a difficult process to retrieve the bodies," said Poudyal.

It took a helicopter several trips to bring the bodies -- five South Koreans and four Nepalis -- down from the camp in the Dhaulagiri mountain range of Nepal's Annapurna region.

They arrived in the capital Kathmandu late afternoon on Sunday by chopper, an AFP photographer at the scene confirmed.

The accident is believed to have happened either late Thursday or Friday, but there are no surviving witnesses.

Relatives and friends broke down in tears as the bodies were carried out from the choppers after they landed outside a hospital in Kathmandu.

"There needs be an investigation... my hope is that more information will come to light over the next day or two as the remains are collected and analysed," said Dan Richards of Global Rescue, a US-based emergency assistance group that helped with the retrieval effort.

The alarm was raised only on Saturday morning when the team had not been in contact for over 24 hours, said Wangchu Sherpa of Trekking Camp Nepal, who organised the expedition.

A helicopter was sent to investigate and spotted the bodies, but strong winds prevented the rescue team from retrieving the dead. 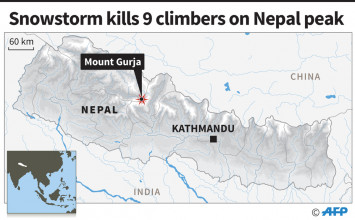 The expedition was led by experienced South Korean mountaineer Kim Chang-ho, who has climbed the world's 14 highest mountains without using supplemental oxygen.

The team had been on 7,193-metre (23,599-foot) Mount Gurja since early October, hoping to scale the rarely climbed mountain via a new route.

A sixth South Korean climber was staying at a village lower in the valley when the storm hit, after being forced to a lower altitude by health problems.

Only 30 people have ever reached the summit of Mount Gurja with the last successful ascent recorded in 1996, according to the Himalayan Database.

The freak accident is the deadliest incident to hit Nepal's mountaineering industry since 18 people were killed at Mount Everest's base camp in 2015 in an avalanche triggered by a powerful earthquake.

The previous year, 16 Sherpas were killed on Everest when an avalanche swept through the Khumbu Icefall during the busy spring climbing season.

Then in October that year, a blizzard killed more than 40 tourists and their guides in the Annapurna region, a disaster that was largely blamed on poor weather forecasting and lacklustre safety standards in Nepal's poorly regulated trekking industry.