The staff at the opening of La Beauté & Style salon in New Delhi.

A beige sofa, a white reception desk, and a wall painted in the colours of the rainbow greet customers of La Beauté & Style salon. Standing proudly on the desk at reception is an LGBT flag.

The salon is a first for New Delhi. It is owned by a transgender duo and staffed entirely by transgender men – people who were assigned the female gender at birth but identify as male.

Its co-founder Aryan Pasha is a lawyer, activist, and India’s first transgender man bodybuilder. Pasha opened the parlour with his life partner Laxmi Narayan Tripathi, a famous trans rights activist he met in 2015, to give transgender people a safe and inclusive place to earn a living.

It’s a mission of vital importance in India where, according to the National Human Rights Committee, 96 per cent of transgender people are denied jobs because of their gender identity, while 99 per cent have faced social rejection at least once in their lifetime.

Pasha’s parents supported his transition, but most transgender folks he meets have faced ostracisation and abuse for their identity, even from family. He said he saw first-hand the discrimination most transgender people faced while house-hunting and looking for work.

“Either landlords would stop calling when they learned we were a transgender couple, or they would ask for three to four times the normal rent.”

With financial help from the Joint United Nations Programme on HIV and AIDS and the Gravittus Foundation, the pair set up the salon in East Delhi’s Dilshad Garden. Pasha’s father owned the land, so they were “spared further harassment by landlords”.

Pasha said opening the salon was not just about providing work to the community.

“It’s also a way of educating society; a way of providing means for cis-people [someone whose gender identity is the same as their sex assigned at birth] to interact with transgender folks because the more time we spend together, the more they will realise transgender people are just, well, people.”

Before he met Pasha, the salon’s receptionist Nakshatra Rajput had been scarred by the transphobic treatment of former employers.

Previously, the 25-year-old had worked at an outsourcing firm as a quality manager. An MBA graduate and a genial person, Rajput was well-liked by colleagues and doing well within the company.

All that changed abruptly when he revealed to his bosses that he was a transgender man and would soon undergo transition treatments.

“The day I told them that I’m a trans man, they began treating me like I’m a puppet or a person from another world. I could do nothing right from then on,” he recalled.

However, the statute is often ignored or skirted by companies. Rajput’s company didn’t fire him but “their treatment of me got so bad I had to leave,” he said.

Soon after that, the Covid-19 pandemic and its related lockdowns arrived, making it hard for him to find a job – difficulties made only worse by the discrepancies in his identity documents.

Though listed as a female in his IDs, hormone replacement therapy (HRT) had deepened Rajput’s voice and changed his appearance.

It was during the 2020 lockdown that Rajput met Pasha and was offered the job at the salon. Though overqualified for the work, Rajput said, “coming from an office where my colleagues turned on me after I came out as trans, it’s freeing to work in a place where I feel safe and don’t need to hide my identity.”

Pasha also provides free training for the salon staff, in beautician work such as hair colouring and facials, in reception services and management skills.

This is important for a population that has little access to education. 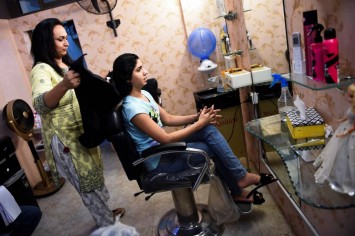 With little to no access to education, a large proportion of India’s transgender population survives on sex work, which leaves them vulnerable to police extortion, diseases such as Aids, and low self-worth.

This also prevents many from accessing sex-reassignment surgery, which according to the rights committee is both desired and beyond the financial means of 57 per cent of the community.

Ayush, 29, is among the many to have struggled to get medical help, though he knew from a very young age that he was transgender. “I wanted to play with the boys; I hated long hair. In school, I was teased and beaten by students and teachers alike,” he recalled.

When Ayush graduated, he decided to begin hormone treatment, the first step towards sex-reassignment surgery. Fearing violent reprisal, he didn’t come out to his family, but took a secret job as a milk-delivery person for two years to earn money for HRT.

“I woke up at 4am every morning, went to work, milked cows and delivered the milk,” he said. By 8am he would have snuck back into his house. “My family would just wake up, and by then, I would be hidden under my blanket, as if I’d been asleep.” He also took jobs as a security guard, without revealing his gender identity.

Sex-reassignment surgery, including HRT, surgeries and subsequent aftercare, costs in the region of 400,000 to 800,000 rupees (US$5,400-10,800) for female to male transitions. Even just the testosterone injections cost 300 to 500 rupees each, depending on the brand and dosage. These must be taken by transitioning men every two or three weeks.

Ayush said it took him years of delivering milk to make enough for his HRT. He earned 400 rupees per month for the job, and often couldn’t even afford one injection a month.

A sense of acceptance

To its employees, the salon is more than just a workplace. It is a refuge from a society that views them as “other”.

Ayush came out to his family as transgender two years ago. His father hasn’t spoken a word to him since. “It hurts, of course. My father has not looked at me or talked to me for two years. As if, for him, I no longer exist,” he said.

On a recent visit to the salon, the camaraderie among its employees was obvious. Staff shared food and swapped stories about everything from hormone treatments to sports, women and clothing.

“If you ask me what the difference is between working here and working in other places, it is that here I am not treated differently,” Rajput said.

“I’m just a person, given no special treatment and accepted for myself.”