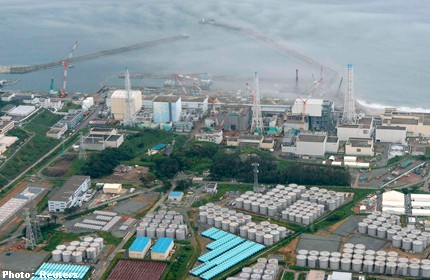 TOKYO - The operator of Japan's crippled Fukushima nuclear plant said on Thursday new spots of high radiation had been found near storage tanks holding highly contaminated water, raising fear of fresh leaks as the disaster goes from bad to worse.

The announcement comes after Tokyo Electric Power Co (Tepco) said this week contaminated water with dangerously high levels of radiation was leaking from a storage tank.

A tsunami crashed into the Fukushima Daiichi power plant north of Tokyo on March 11, 2011, causing fuel-rod meltdowns at three reactors, radioactive contamination of air, sea and food and triggering the evacuation of 160,000 people.

It was the world's worst nuclear accident since Chernobyl in 1986 and no one seems to know how to bring the crisis to an end.

Although no puddles were found nearby and there were no noticeable changes in water levels in the tanks, the possibility of stored water having leaked out cannot be ruled out, a Tokyo Electric spokesman said.

The confirmed leakage prompted Japan's nuclear watchdog to say it feared the disaster was "in some respect" beyond Tepco's ability to cope.

The UN's International Atomic Energy Agency (IAEA) said on Wednesday it viewed the situation at Fukushima "seriously" and was ready to help if called upon.

China said it was "shocked" to hear contaminated water was still leaking from the plant, and urged Japan to provide information "in a timely, thorough and accurate way".