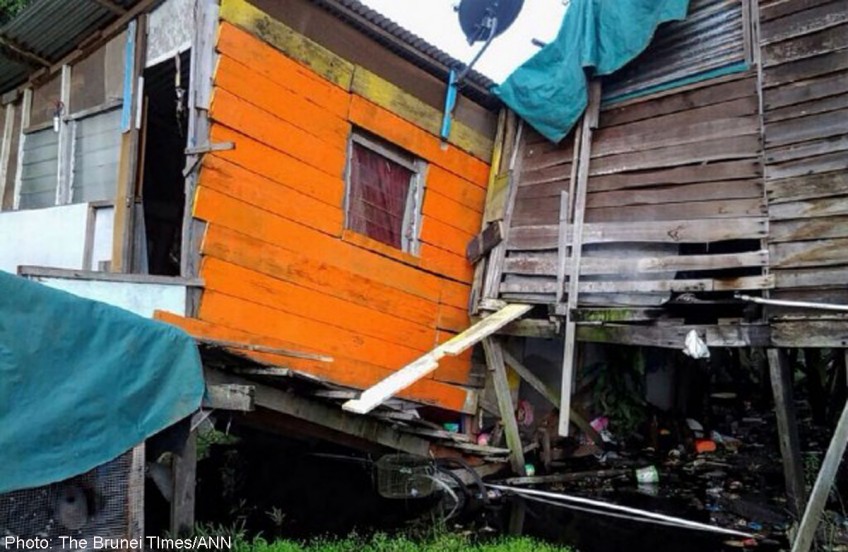 No serious injuries were repor-ted amongst the 5 family members or the 25 other relatives and friends who were also present to usher in the New Year.

In describing the ordeal, 30-year-old Mohd Haikal Abdullah told The Brunei Times yesterday that the stilts of the house - which are buried in swampy land - gave way when everyone moved into the living room to eat.

"We were all waiting for the clock to strike 12am, to celebrate the New Year. As we were all planning to eat together, we began moving (into the area) which then suddenly collapsed," said Mohd Haikal, whose family of five are temporarily living in a flat belong-ing to the Ministry of Culture, Youth and Sports in Kuala Belait.

"We first called the village head who then immediately contacted the Fire and Rescue Department. The following day the District Office called, and then later came by to give keys to the flat where we are staying temporarily. We are looking forward to meeting them (Belait District Office) again on Monday so we can discuss what our options are," said Mohd Haikal, who works as a scaffolder.

He ruled out fixing the house - which is built on his in-law's land - straight away, judging that it "would still be the same" as the soil beneath it remains swampy.