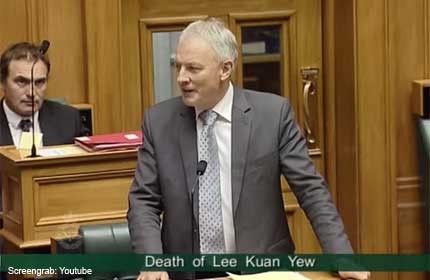 During the country's parliamentary session on Tuesday, New Zealand's Deputy Prime Minister Bill English expressed his condolences to Mr Lee's family and the people of Singapore.

"He was also instrumental in establishing the Association of South-east Asian Nations (ASEAN)-New Zealand and ASEAN celebrated our 40th anniversary this year.''

Former Labour leader Phil Goff said Mr Lee was "an extraordinary figure". He shared that it was Mr Lee's 1965 speech on Singapore's separation from Malaysia that was "the first political speech that ever impacted me''.

Mr Goff also shared that his mother was an admirer of Mr Lee.

"In 1977, as a student having gone six years without a haircut, passing through Singapore, I was given my first haircut by custom officials at the airport as a price for entry,'' Mr Goff explained.

"My mother congratulated him (Mr Lee) on achieving something that nobody else had been able to do for years before that time," Mr Goff told Parliament.