'No way back' in Myanmar's crucible of communal hate 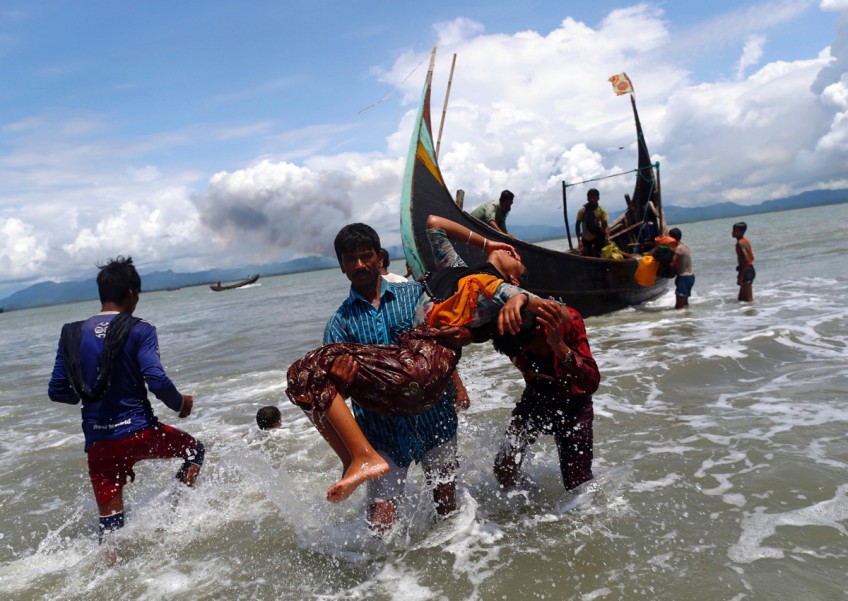 Smoke is seen on Myanmar's side of border as an exhausted Rohingya refugee woman is carried to the shore after crossing the Bangladesh-Myanmar border by boat through the Bay of Bengal, in Shah Porir Dwip, Bangladesh September 11, 2017.
Reuters

Sittwe, Myanmar - Hindus once sold food to Rohingyas, spoke the same language and even cut the hair of their Muslim neighbours. But co-existence among the collage of ethnicities in Myanmar's Rakhine state has been ruptured - perhaps irreversibly - by the bloodshed of the last month.

Violence has periodically cut through the western state, where communal rivalries have been sharpened by British colonial meddling, chicanery by Myanmar's army and fierce dispute over who does - and does not - belong in Rakhine.

But the events of August 25, when raids by Rohingya militants unleashed a swirl of violence across the north, have sunk Rakhine to new depths of hate.

"All of our family died at the village... we will not go back," said Chaw Shaw Chaw Thee, one of hundreds of displaced Hindus seeking shelter in the state capital Sittwe.

The 20-year-old said she lost 23 family members as Rohingya militants swarmed the clutch of Hindu villages in Kha Maung Seik, near the Bangladesh border.

On Sunday the army said 28 badly-decomposed bodies of Hindu men, women and children had been pulled from two mass graves in the same area.

It was not immediately clear if they belonged to Chaw Shaw Chaw Thee's family.

Heavily pregnant when she fled, she gave birth at a disused football stadium in Sittwe, where hundreds of traumatised Hindus now sleep on grubby mats in the overcrowded concourse.

An army lockdown has made it impossible to independently verify what happened in the villages of northern Rakhine, an area dominated by Rohingya Muslims who are a minority elsewhere in the mainly Buddhist country.

But allegations, carved along ethnic lines, are spinning out as conspiracy and competing identity claims override empathy between former neighbours.

Hindus, who make up less than one per cent of Rakhine's population, accuse Rohingya of massacring them, burning their homes and kidnapping women for marriage.

Meanwhile the Rohingya, some 430,000 of whom have fled to Bangladesh, trade accusations with ethnic Rakhine Buddhists of grisly mob attacks and army "clearance operations" that have emptied their villages.

Small ethnic groups such as the Mro, Thet and Diagnet have also been caught up in the killings and chaos of the last month.

"We were barbers for Muslims, our women sold things in Muslim villages, I had Muslim friends, we had no problems," said Kyaw Kyaw Naing, a 34-year-old Hindu who can dance across linguistic divides in Hindi, Rakhine, Burmese and Rohingya.

Community ties in what is also Myanmar's poorest state have now unravelled.

"We want to go back, but we will not if the Muslims are there." .

Last week Myanmar's leader Aung san Suu Kyi told the international community that Rohingya refugees were welcome back if they were properly "verified".

But delivering on that promise will be almost impossible in a country where the status of the Rohingya is incendiary.

The Rohingya say they are a distinct ethnic group whose roots stretch back centuries.

Myanmar's powerful military insists they are "Bengalis" who were first brought to the country by British colonisers and have continued to pour in illegally ever since.

"It can't be solved in the short-term... to be stable and harmonious could take decades," Oo Hla Saw, a lawmaker for the Arakan National Party, which represents Rakhine Buddhists, told AFP.

Rakhine's history is bitterly contested and flecked by rivalries.

Once a proud a Buddhist kingdom with a deep Muslim influence from trade and settlement, Rakhine's demographics were overhauled by British colonial administrators.

They shunted in large numbers of Hindu Indians and Bengali Muslims as farm hands to an area already populated by a soup of ethnicities including the Rohingya and Rakhine.

The Japanese invasion during World War II saw Rakhine clash with Rohingya, who were perceived to have been favoured by the retreating British.

Since 1962 the military has kindled anti-Rohingya sentiment, painting itself as the protector of the Buddhist faith from conquest by Islam.

Three major campaigns - in 1978, the early 90s and now - have driven Rohingya from Myanmar in huge numbers.

The army, which ran the country for 50 years and still has its hands on key levers of power, has also gradually rubbed out the group's legal status.

A 1982 law stripped Rohingya of citizenship, subjecting them to suffocating controls on everything from where they can travel to how many children they can have.

"The army wants to clear the Muslim community from Rakhine state," says Kyaw Min, a Rohingya and former MP, who has had his citizenship revoked.

"The intention is to drive down the Rohingya population. They have achieved that in the south of Rakhine, now they are targeting the north." Repression has fed Rohingya militancy, according to analysts.

But a few hours after its report was published, the militants attacked, sparking a ferocious military response that the UN believes amounts to "ethnic cleansing".

The report also urged the government to boost the economy to uplift a poor population and build community bonds.

Business ties and personal relations once defied communal lines, with Rohingya who could not legally own property relying on Rakhine neighbours to secure deeds for them on the sly.

Now the fearful displaced inside Rakhine say there is no way they can ever again live alongside Rohingya neighbours.

Khin Saw Nyo, 48, an ethnic Rakhine, said nearby Muslim villagers suddenly turned on her community near the Bangladesh border, forcing them to flee to the mountains.

"We will die if we go back," she told AFP from inside a monastery sheltering refugees in Sittwe, adding Rohingya militants are still preparing to strike.

"They warned us to eat well... they said the next time we will not escape."