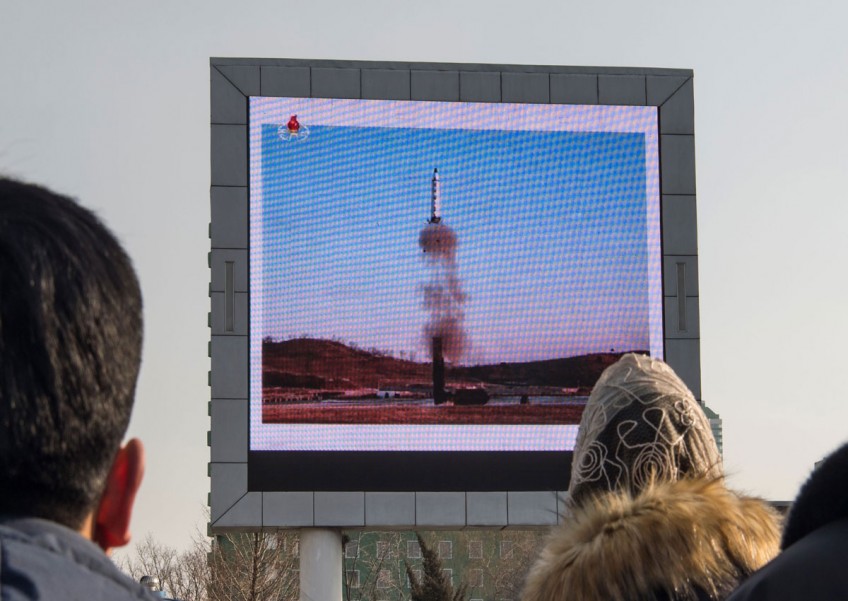 People in Pyongyang watching a public broadcast about the launch of a surface-to-surface medium long-range ballistic missile Pukguksong-2 at an undisclosed location.
AFP

North Korea's latest rocket-engine test showed "meaningful" progress, South Korea said on Monday (March 20), while an analyst said it was a dangerous step towards the North's goal of developing a rocket that could hit the United States.

The North's announcement of a successful engine test came as US Secretary of State Rex Tillerson was in Beijing at the end of his first visit to Asia for talks dominated by concern about North Korea's nuclear and missile programmes. "Through this test, it is found that engine function has made meaningful progress but further analysis is needed for exact thrust and possible uses," Lee Jin Woo, deputy spokesman for the South Korean defence ministry, told a regular briefing.

State-run North Korean media reported that leader Kim Jong Un had hailed the successful test of a new high-thrust engine at its rocket launch station as "a new birth" of its rocket industry.

However, he did not elaborate on the progress the test showed the North had made, nor comment on whether the engine could be used for an intercontinental ballistic missile (ICBM), saying the South Korean military was conducting analysis.

US President Donald Trump told reporters he held meetings on North Korea at the weekend at his Florida resort. While he did not refer specifically to the rocket-engine test, he said Kim Jong Un was "acting very, very badly".

Read also: Taiwan not on radar as US, China face N Korea

A South Korean analyst said the test was an ominous development. "This was a comprehensive test for the first-stage rocket for an ICBM, and that is why it was dangerous," said Kim Dong Yub, an analyst at Seoul's Institute for Far Eastern Studies. "It appears that North Korea has worked out much of its development of the first-stage rocket booster." North Korea has conducted five nuclear tests and a series of missile launches in defiance of UN sanctions, and is believed by experts and government officials to be working to develop nuclear-warhead missiles that could reach the United States.

North Korean leader Kim said in January his country was close to test-launching an ICBM. That would put parts of the United States in range.

Last week, Tillerson issued the Trump administration's starkest warning yet to North Korea, saying in Seoul that a military response would be "on the table" if it took action to threaten South Korean and US forces.

Read also: US deploys attack drones to South Korea amid tension with North

The United States has long called on China to do more to rein in its ally, North Korea. China resents being pressed to do more, saying the problem is between North Korea and the United States, although it too objects to the North's nuclear programme.

No formal agreements were announced during Tillerson's visit to China although the two sides said they would work together to try to make North Korea take "a different course".

China has called for a dual-track approach on North Korea, urging it to suspend its tests and the United States and South Korea to suspend military exercises so both sides can return to talks.

Beijing has also been infuriated by the deployment of an advanced US anti-missile system in South Korea, which it says will both harm China's own security and do nothing to ease tensions.

China says the system's powerful radar will extend into the country's northeast and potentially track Chinese missile launches, and maybe even intercept them. Russia also opposes the system, for the same reasons.