SEOUL - North Korea on Wednesday confirmed the arrest of a US professor for trying to "overturn" the regime, as tensions spike between the isolated nuclear-armed nation and Washington.

Kim Sang-Duk, or Tony Kim, became the third American held in the North when he was detained at the capital's airport on April 22 as he tried to leave the country, after teaching for several weeks at an elite university.

In the North's first confirmation of the professor's detention, the official Korean Central News Agency (KCNA) said he had been held for "committing criminal acts of hostility aimed to overturn the DPRK", using an abbreviation for the country's official name.

It added that Kim was "under detention by a relevant law enforcement body which is conducting detailed investigation into his crimes".

The confirmation of Kim's detention comes as Pyongyang issues increasingly belligerent rhetoric in a tense stand off with the administration of new US President Donald Trump over its rogue weapons programme.

Kim had been teaching accounting at the Pyongyang University of Science and Technology (PUST), which said last month that the professor had been held.

The school - founded by evangelical Christians from overseas and opened in 2010 - is known to have a number of American faculty members and pupils are generally children from the country's elite.

In a statement in late April the university said the arrest was "not connected in any way with the work of PUST".

It added that the Swedish embassy in Pyongyang - which handles issues involving US citizens as Washington has no diplomatic ties with the North - was "actively involved" in talks.

Kim is a former professor at Yanbian University of Science and Technology in China, close to the Korean border. Its website lists his speciality as accounting.

South Korea's Yonhap news agency has given Kim's age as 55 and said he had been involved in relief activities for children in rural parts of North Korea. It cited a source familiar with the matter who described Kim as a "religiously devoted man". 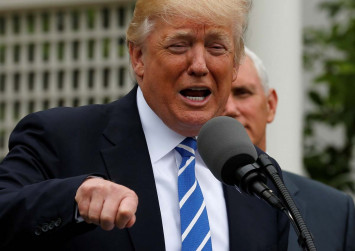 Two other US citizens - college student Otto Warmbier and Korean-American pastor Kim Dong-Chul - are currently being held in the North after being sentenced to long prison terms.

The pastor was sentenced last year to 10 years of hard labour for spying. Warmbier was sentenced to 15 years in 2016 for stealing a propaganda material and for "crimes against the state".

North Korea has arrested and jailed several US citizens in the past decade, often releasing them only after high-profile visits by current or former US officials or former US presidents.

Pyongyang, which has conducted a string of nuclear tests and missile launches, warned Monday that it was prepared to carry out another atomic test "at any time and at any location" set by its leadership unless Washington scraps its hostile policies.

Trump has suggested military action could be on the table in the past but on Monday seemed to soften his message, saying he would be "honoured" to meet North Korean leader Kim Jong-Un under the right conditions.