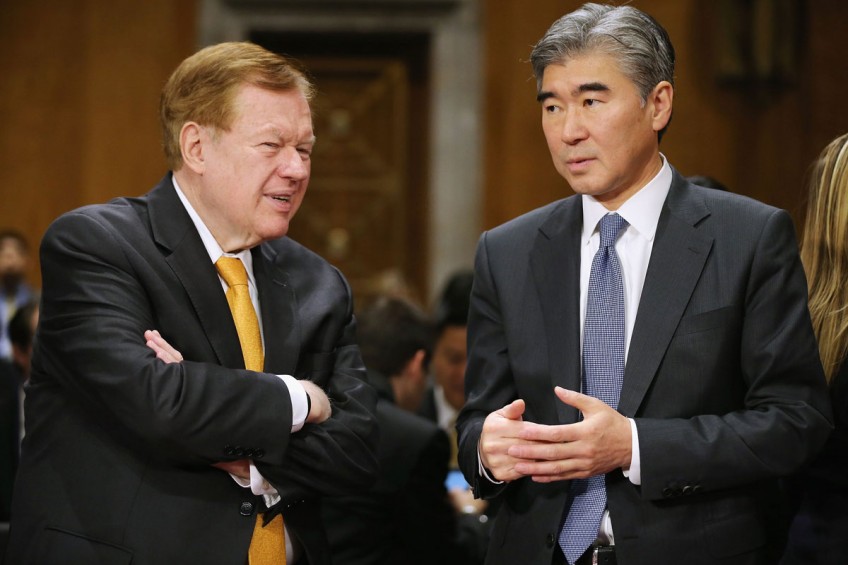 Pyongyang's renewed efforts for a peace treaty are backfiring with Seoul and Washington dismissing them as yet another attempt at deflecting attention away from the allies' focus on its denuclearization.

Over the last month, the communist regime has repeatedly proposed talks with the US on replacing the current armistice agreement with a peace treaty, reiterating the US should scrap its "hostile" policy toward it and work together to build a peace regime.

Washington spurned the proposal, stressing that the North's denuclearization should be prioritized.

"With regard to the North Korean statement suggesting we enter into peace treaty discussions, we have no interest in entering into any such discussions," US Special Representative for North Korea Policy Sung Kim said during a Senate hearing on Tuesday.

"For us, the priority focus has to be the nuclear issue. As they often do, I'm afraid the North Koreans have their priorities wrong by suggesting that we sort of jump some steps, some very important steps, and start peace treaty negotiations."

Seoul put up a united front with its ally, accusing Pyongyang of trying to avoid increasing international pressure on it to renounce nuclear arms that it claims to have already "miniaturized and diversified."

"North Korea's attempt at holding negotiations with the US over a peace treaty before its denuclearization is like going backwards in time, as it did in the past," a senior Seoul official told reporters, declining to be named.

"That is actually an attempt to sideline South Korea (in the negotiations) and those schemes will no longer work. Those days (when that worked) are gone."

Seoul and Washington have long been reluctant to discuss Pyongyang's proposal as it involves the withdrawal of US forces on the peninsula and of the US' guarantee of the nuclear umbrella, both of which would shake the foundation of their alliance.

Under the Joint Statement that was issued on Sept. 19, 2005, at the now-dormant six-party denuclearization talks, the concerned parties are to have separate talks on establishing a durable peace treaty. The parties include two Koreas, the US, China, Japan and Russia.

Pyongyang seems to be trying to set the mood for talks on the peace treaty as the atmosphere seems to be turning favourable for the resumption of the six-way dialogue, said Koh Yoo-hwan, a North Korea expert at Dongguk University.

"The North is calling for talks on the peace treaty as the mood is emerging for the six-party talks after the two Koreas reached the Aug. 25 deal to defuse cross-border tensions and when neighbouring states have been holding a flurry of talks on the resumption of the six-way forum," he said.

"What the North seems to be proposing is to sign a peace treaty first before discussing its denuclearization. We can say that the North is trying to put the peace treaty on the agenda (for future six-party talks)."

The six-party talks were last held in December 2008.

Seoul and Washington have called on Pyongyang to first demonstrate that it is sincere about its denuclearization, while Pyongyang and Beijing called for the unconditional resumption of the talks.

To forge a fresh momentum for the talks, Seoul has proposed holding unconditional "exploratory" talks on the North's nuclear arms before holding the six-party talks. But Pyongyang has not responded to it.