After two months of hunting, the North Sumatra Natural Resources Conservation Agency (BKSDA North Sumatra) has succeeded in catching a Sumatran tiger that killed a farmer.

The agency found the tiger alive on Tuesday in Huta Bargot subdistrict, Sosopan district, Padang Lawas regency, after it entered a trap the agency's team had prepared.

The tiger was suffering from wounds on its right leg when caught, believed to have been caused by snares placed by residents.

BKSDA Padang Sidempuan head Gunawan Alza said the trap prepared by the BKSDA team did not use snares. It was an iron cage with a goat inside as bait. 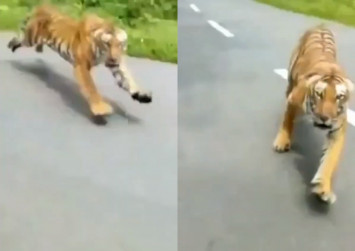 He added that the animal had been taken to the Dharmasraya Sumatran Tiger Rehabilitation Center in West Sumatra, located some 514 kilometers from Sosopan.

A farmer was reportedly fatally attacked by the tiger at a rubber plantation in Siraisan, Ulu Barumun district, Padang Lawas, on May 17.

A week later, the animal attacked another villager, who was severely injured. The same tiger is also believed to have preyed on a pet monkey on July 10.