The next time you check into an Airbnb accommodation, you may want to inspect the room before unpacking your luggage.

Another incident of a host snooping on his guests has come to light, and this time around, it happened in Kaohsiung, Taiwan.

A Chinese couple was alarmed to find hidden cameras in their room during their stay in February this year.

They were planted in smoke detectors installed in the bathroom and bedroom.

In an interview with BC News, the woman surnamed Liu revealed details of the unpleasant experience.

When her boyfriend, who works as a photographer, told her that he suspected they were being watched in their room, she didn't believe him initially.

But she was proven wrong when they inspected the smoke detectors and found the hidden cameras.

They alerted the police who confirmed that they had been secretly filmed.

Footage retrieved from the cameras' SD card showed Liu's boyfriend taking a shower in the bathroom, as well as photographs of the couple watching television in the bedroom.

According to BC News, another three rooms owned by the same Airbnb host were found to be rigged.

The host first claimed that the hidden cameras were installed by the previous property owner, but later said that he had used them to monitor whether his guests were smoking in the rooms.

Liu said that she chose to stay at the apartment after seeing that it had received good reviews on Airbnb. 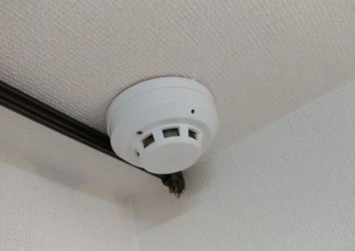 But for a place that marketed itself online as a safe lodging for foreign travelers, guests lost their rights to privacy when they were secretly filmed.

Although the lodging which was in operation for many years, the owner quickly sold the property after the exposé, Liberty Times Net reported.

Angered by the host's devious actions, Liu decided to sue him.

According to SETN, the first court hearing will take place this Friday (Aug 18), with the couple seeking 3 million TWD (S$13,000) in damages. Airbnb said in a Weibo post that it has made a full refund to the guests and blacklisted the host.Photo: Weibo

Meanwhile, Airbnb said in a Weibo post that it has made a full refund to the guests and blacklisted the host in the online hospitality community.

It reiterated that hosts have to inform guests of any surveillance equipment installed in the accommodations and that cameras in the bathrooms or bedrooms are strictly forbidden.

If you ever feel like you're being watched, here are four ways to detect hidden cameras.