Not music to their ears 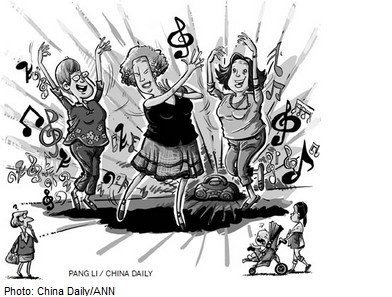 The quintessential Chinese phenomenon of dancing in public parks may not be appreciated in other cultures.

Old women dancing in public parks is a fixture in urban China. Chinese walking or driving by take it for granted. But for foreigners on their first trip to China, this is a sight that may puzzle them.

Now imagine such a scene in Brooklyn, New York. In June, a group of elderly Chinese women were stopped by police and the lead dancer was threatened with arrest if they did not turn down the volume of their music. The neighbours had been complaining about the noise, the cops said.

No one seems to have offered a sociological dissection of the old-women-dancing-their-hearts-out phenomenon. The way I see it, it speaks volumes about China in transition and the way Chinese conduct themselves. As I remember, such group dancing did not exist until the 1990s on a national scale. In a sense, it is the purest form of entertainment because it is self-organised and self-funded unless the government asks them to participate in official events.

While the participants see it as a cross between dance and aerobics, I believe the primary function is socializing. The retired population, especially women, need a platform to communicate with one another and establish a sense of belonging. In the old days, they would call on each other and gossip over sesame seeds. In the future, people may rely on their mobile gadgets for such functions. But for the current generation who do not need to take care of their grandchildren and who have surplus income for social activities, group dancing is an exercise in both physical dexterity and mental agility.

Above all, it is a picture of contentment that comes with fecundity in life. Someone scraping by would not think of partaking in this kind of frolicking senior style. For me, this form of spontaneous performance says more about the value of entertainment than even a meticulously rehearsed show with glitz and fanfare. Just look at the faces and you'll know the smiles are from the heart.

For an outsider, the puzzling thing may not be dancing per se, but the occasion or location. Shouldn't such activities take place indoors, say, a recreational centre for seniors, they may ask. I guess choosing public open spaces like parks was initially out of necessity. China does not have lots of facilities for the retired. Even exercise machines, the kind that belong in a gym or a playground in the US, are mostly installed along strips of common residential ground.

Although they have no access to rehearsal rooms, many of the elderly have obviously developed a feeling similar to that embodied by professionals, ie, the satisfaction of showing off their talents and joy in front of a live audience. They may act nonchalant, but they crave for a level of showmanship complete with costumes and the whole nine yards. Applause or not, it is a stage they did not get a chance to grace during their youth and are now making up for it.

That probably explains the volume of the music, which is usually loud and has now set off a cross-cultural skirmish. Parks in China are generally located far away from residential areas. If a residential building can hear the music, there are probably all kinds of noises that either drown out the music or blur it into the ambience. In China, this kind of dance music is by far not the most annoying.

But not in New York, where one culture's mellifluence could be another's stridency. Chinese music, especially that used for the drum dance, does not easily merge into the background. It catches attention simply by its exoticism. Coupled with the high volume, it may well incite unpleasant responses from neighbours who do not share the culture. This is somewhat equivalent to a classical music aficionado and a heavy metal lover engaging in a debate about which style sounds better. Each side is convinced of the superiority of the one he prefers.

Even though the press report did not mention it, I'm pretty sure the dancing ladies felt unappreciated for their efforts to entertain the neighborhood. Sure, they would claim it was for self-entertainment, but in the depth of their hearts they wanted to impart their joy to those around them. Not in a thousand years did it occur to them to disturb the peace of the environment.

If enough people take part in the activity, I assume they could apply for the free use of community centers where rooms are sound-proof and air-conditioned. The US has much better public service facilities at the grassroots level than China does, so people who settle there, including Chinese migrants, should learn to fit in that mode of operation. If the group qualifies as one of performance, it may even be eligible for partial government funding. Of course, economic difficulties in the US have led to large cutbacks and financial support for such groups is not as easy to obtain as before.

Now about the exhibitionistic streak. Chinese people are known to generally keep a low profile and are not adept at presenting themselves. The act of dancing in public without being asked for it simply runs counter to that age-old perception. If you randomly pick a Chinese student and an American student to speak in a classroom, chances are the Chinese will not do as well. It is indeed something in our collective cultural genes. In China, the majority Han population will lose hands-down when competing in singing and dancing with the ethnic groups. Is this stereotyping or racial profiling? I don't know. One should not apply it to an individual, but inside China the point is largely accepted.

We should not forget that China is also a nation of karaoke. If you ramble through the innards of a palatial karaoke catacomb, you'll come to the conclusion this is a nation of showoffs, even when no tangible vocal talent is detectable. Why make a fool of yourself in front of others when you can do it in the shower?

You may think this is a Chinese conundrum, but it may be simpler than you think. Yes, there are introverts and extroverts everywhere, and one country may have more of one type than the other. But overall, people need an outlet for self-expression. It is the forms of such expressions that differ from country to country, from era to era. Public displays of affection, for example, used to be taboo in China. Now Chinese people are more accepting of them. Chinese banquets, on the other hand, are often raucous while a formal dinner in the US or Europe tends to be quiet and dignified.

Chinese often show awkwardness at certain social functions. That is because they are thrust into situations unfamiliar to them. If you study the classic Chinese novel, A Dream of Red Mansions, people are glib and know exactly what to say or do. It's just that their way of showing off is to compose extemporaneous poems. And that is not a skill a person of modern times, Chinese or foreign, can easily boast. In another age, the elderly would be either practicing brush calligraphy or having a sewing contest. Being health conscious, they now do fitness regimes that make them feel and look good. As long as their music does not reach those who do not want to be disturbed, I think it is a beautiful sight.