Not your usual day out for a tourist in Hong Kong: Curious visitors join walking tours to see protests

Many tourists may have Victoria Peak, Ocean Park or Lantau Island on their Hong Kong itineraries, but in a sign of the times, one tour company has added something new: protest tours.

Hong Kong Free Tour, which takes visitors to see "the real Hong Kong", including its poorer districts, has seen an opportunity at a time when anti-government unrest has hit the tourism industry hard.

"Both locals and international travellers are welcome to join," reads the online description for the new tours. "Please note that you are responsible for your own safety when you join this tour."

Owner Michael Tsang Chi-fai, 36, is fired up by the latest addition to the company's offerings.

"I wake up and I want to do the tour. I want to tell people, 'This is what's going on in Hong Kong'," Tsang said, adding that all his tours are free to join but rely on donations.

Tours to ongoing conflict zones exist elsewhere. In the West Bank, for example, visitors are taken to Israeli settlements and Palestinian refugee camps, while in eastern Ukraine, tourists can go to towns where conflicts with Russia continue.

Tsang held his first protest tour on Oct 4, the day the government introduced its ban on face masks. Since then, he has run three more of them, taking groups of between two and 17 to protests in Causeway Bay and Kowloon. 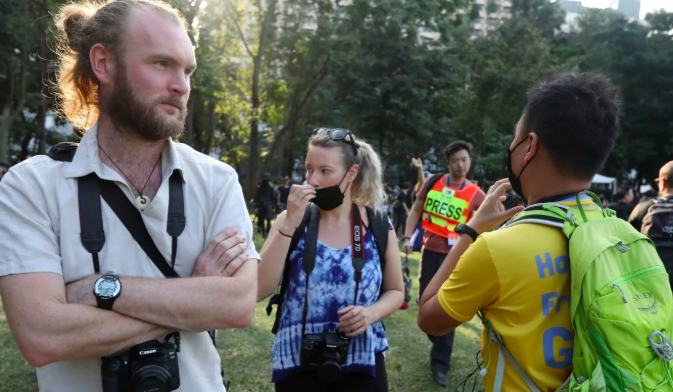 Most people joining the tours have been tourists from the United States and Britain, although two Hongkongers came along for one at the end of October.

On a recent Saturday, Tsang waited for his group at an exit of Tin Hau MTR station, his bright yellow shirt standing out in the sea of people dressed in black, some with gas masks dangling from their necks.

The afternoon tour would centre around Victoria Park, where protesters gathered to support pro-democracy candidates in the city's district council elections, due on Nov 24.

The police had banned the rally, meaning those present could be arrested for illegal assembly. Tsang said he takes a selfie with the visitors as proof that they are in a tour if the police confront them.

Two people turn up, both teachers, one British and the other American.

As police vans sped past behind him on Hennessy Road, Tsang launched into a pre-tour talk, saying: "You might have heard a lot of things in the news, but our purpose is to walk and judge where we are in the movement."

To help the foreigners understand, he explained how the protests were triggered by the unpopular extradition bill which many feared would lead to fugitives being sent to mainland China, among other jurisdictions with which Hong Kong has no exchange arrangement.

Andy Jones, a geography teacher from Birmingham, said he was curious about the protests, but did not know where to find them, or even when they would take place.

"The foreign office advised UK citizens not to get involved, but I wanted to make the most of this trip," Jones said, adding that he heard about the protests while in the UK, and wanted to see them for himself.

Sarah Severance, 32, an American teaching English in China, said the steady escalation in violence over the past months had not deterred her from experiencing a Hong Kong protest first-hand.

"I feel it's even more important now to see what's happening," she said. 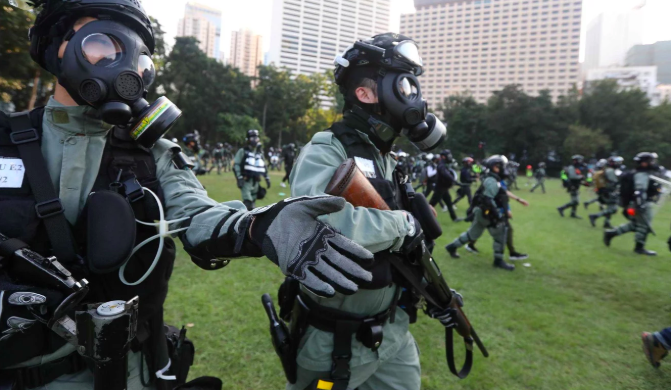 The tour continued into the park's football field, where protesters heaved a goal frame to use as a barricade. Police stood outside the park, a black flag warning they would use tear gas to disperse the crowd.

"I've never been tear-gassed before," Jones said. "I can feel it in my eyes, throat, and on my skin."

He was surprised police had fired tear gas when they did. "It seemed really peaceful and there were so many people," he said.

Severance, who was on her first visit to Hong Kong, said the protest experience did not put her off returning.

Tsang said it was the first time his protest tour ended with tear gas.

"There's always a possibility that this will happen," he said. Although everyone was safe, he added that he was considering starting future tours earlier, and making the risks clear to guests.

Told about Tsang's protest tours, tourism sector lawmaker Yiu Si-wing, director at China Travel Service, did not like the idea.

"No one can guarantee what will happen at the scene of protests," he said, citing the example of a Japanese tourist beaten by protesters for taking photos in Mong Kok.

He also said that professional insurance does not cover tour guides who take tourists to such sites.

Hong Kong's Tourism Commission, which develops tourism strategies for the city, said in a statement that guides are expected to inform their customers of any potential risks.

Simon Yu, owner of the Hop Inn in Tsim Sha Tsui, said that before he knew about Tsang's tours, he advised hostel guests keen to see the protests to stay away from any possible unrest.

He has since referred guests to Tsang.

"At the beginning, I was a bit worried when he took guests there," he said. "But he is a very responsible guy and very passionate about what he does."

Terry Stevens, an expert on political tourism based in the UK, cautioned that protest tours run the risk of becoming voyeuristic without careful planning and support.

"It's almost like watching a football match, two sides of supporters having a go at each other," he said, adding that understanding the context of unrest and listening to both sides are necessary.

Tsang, a licensed tour guide, said the main objective of his protest tour, as with the other tours he runs, is to show visitors another side of Hong Kong.

He said visitors read the news about people beating each other up, about vandalism, and about the city not being safe.

"I really want to have them feel for themselves if it's safe or not," he said.