Public Health Minister Piyasakol Sakolsatayadorn has ordered an investigation into claims that cannabis oil "cured" a bed-ridden HIV patient, who has had the virus for over 20 years.

Piyasakol said yesterday that there has been no scientific study indicating that marijuana can be used to cure HIV, the virus that causes acquired immune deficiency syndrome (Aids).

His remarks came after a media report that a bed-ridden HIV patient in Phetchabun province showed signs of improvement after consuming cannabis oil for three weeks. The patient could speak and move more freely, it said, adding that she no longer needed to rely on others for her daily routine.

The minister said he has instructed his Office of Permanent Secretary and Phetchabun's chief public health official to find facts regarding this matter.

"We are not trying to find any fault. We just want to see if it's true. If it is, then there could be some benefit," Piyasakol said, adding that cannabis was found to help relieve pain caused by certain diseases, but there was no scientific evidence proving it can cure HIV. 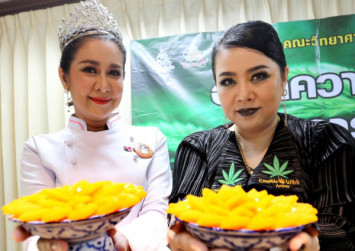 In Thailand, he said, all HIV patients get anti-retroviral drugs regardless of the healthy cell count in their immune system. As a result, the number of deaths caused by HIV/Aids is "very low" in the country, he added. Also, he said, civic groups and NGOs working on HIV/Aids actively follow up on the patients.

A senior Thai Red Cross official also said yesterday that, so far, there has been no information that cannabis can cure HIV.

Dr Praphan Phanuphak, director of the Thai Red Cross' Aids Research Centre, said he suspects cannabis oil made the patient in Phetchabun feel better. "But I can confirm that there is nothing better than the anti-retroviral drugs to treat HIV," Praphan said. He also warned HIV patients against ditching the anti-retroviral drugs in favour of herbal alternatives like cannabis.

"You may put yourself under risk. Herbs can be used as supplements, but not the main method of treatment," he warned.

Apiwat Kwangkaew, leader of the Network of HIV/Aids Patients in Thailand, said yesterday that marijuana is not a cure-all, adding that the cannabis oil may have improved the symptoms of the HIV patient in areas that were not directly related to the virus.

He suggested that HIV patients should not ditch anti-retroviral drugs for yet to be proven alternative treatments. "You may risk drug resistance, which could lead to difficulties in treating your illness. Things like this have happened before," he added.