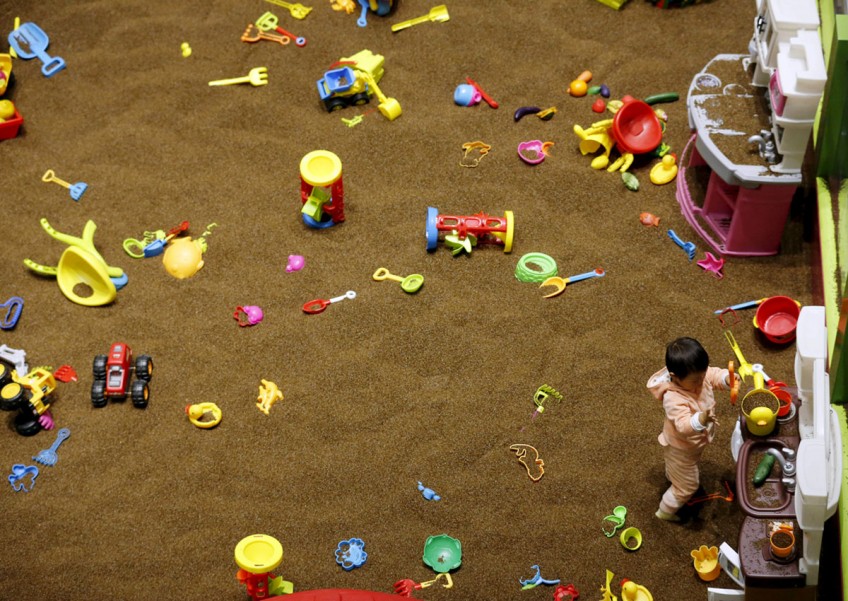 With more and more nursery schools that do not have their own yards, facilities are struggling to find open space for children to play and run around in.

It's not unusual for more than one group of children belonging to different nursery schools to run into each other at neighborhood parks. Some nursery schools are cooperating with those that have playgrounds to share their outdoor space.

Laugh Crew Oizumi nursery school in Tokyo's Nerima Ward has no playground of its own, and when weather allows, its 30-plus children go to a nearby park. The school does set up jumping platforms and crawling tunnels indoors to encourage the children to move around, but aims to have them play outdoors as much as possible.

"It's not big enough for all the kids from three nursery schools to play in, so I think they just gave up," said Miku Kojima, director of Laugh Crew. "That's happened to us, too."

According to Nerima Ward, the four nursery schools on the south side of the nearest station, including Laugh Crew, have no playgrounds of their own. Children from various facilities often run into each other at the park. Regular people also use the park, however, so nursery school children who come later sometimes give up on playing there.

One factor in this situation is the growing number of nursery schools. According to the Health, Labor and Welfare Ministry, there were 28,783 certified nursery schools and preschools in Japan as of April 2015.

As local governments are struggling with preschool children on waiting lists for day care facilities, the number of nursery schools just keeps growing. Unlicensed facilities are increasing as well.

The national standard for a certified nursery school calls for a playground of more than 3.3 square meters per child, but also allows facilities to include "places nearby that can substitute for the playground." A public park can therefore be considered a school's playground.

According to the Tokyo metropolitan government, about 30 per cent of certified nursing schools in Tokyo do not have playgrounds and some do not meet the 3.3-square-meter standard. They are therefore allowed to regard neighborhood parks as playgrounds.

Day care facilities for preschool children that meet the criteria of the Tokyo metropolitan government use the same national standard concerning playgrounds. But since many are located near train stations, about 90 per cent of them use such substitute playgrounds as parks.

This situation has led a number of nursery schools to co-operate with playground-equipped facilities to share the space.

Florence, an authorised nonprofit organisation in Tokyo, arranged for children at 13 nursery schools without playgrounds to play at four nursery schools belonging to Doronko Kai, a social welfare service corporation based in Tokyo.

In October, preschool children in Tokyo's Toshima Ward made their first visit by bus to a Doronko Kai nursery school in Asaka, Saitama Prefecture. "We're grateful to be able to use the rich natural setting of Doronko Kai's grounds," a Florence spokesperson said.

Ayumi Kimura, a representative member of the Association for Children's Environment, a public interest corporation, said: "We should be studying ways to make it easier for these facilities to use public parks or vacant lands on a short-term basis. Especially for children in urban areas, the local communities need to think about how to ensure they have enough space to play."