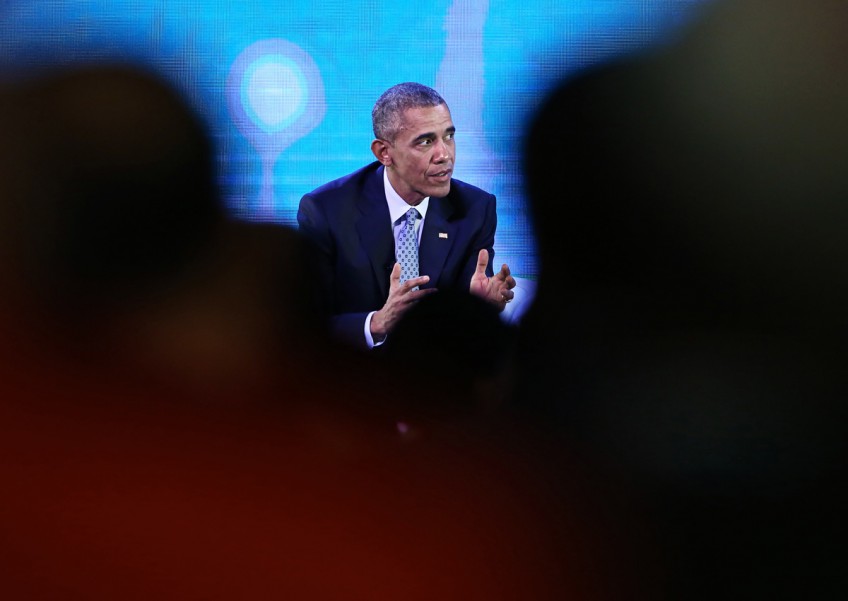 But the territorial row over the strategically vital South China Sea, as well as terrorism concerns following last week's deadly Paris rampage, have dominated the build-up to this year's meeting in the Philippines.

China has repeatedly insisted its disputes with its Asian neighbours over the sea, home to some of the world's most important shipping routes, should not be on the APEC agenda.

"We agree on the need for bold steps to lower tensions, including pledging to halt further reclamation, new construction, and militarisation of disputed areas in the South China Sea." On Tuesday, Obama also announced more than US$250 million (S$355 million) in maritime aid to Washington's Southeast Asian allies - including a warship for the Philippines.

China claims nearly all of the South China Sea, even waters approaching the coasts of its Asian neighbours.

APEC members the Philippines, Vietnam, Malaysia, Brunei and Taiwan have rival claims to parts of the sea, which is believed to sit atop vast oil and gas resources.

China reacted angrily on Wednesday to Obama's efforts to bolster US allies in the dispute, as it insisted its construction work in the contested areas was "lawful, justified and reasonable"."If there is something that should stop, it is the United States should stop playing up the South China Sea issue, stop heightening tensions in the South China Sea," foreign ministry spokesman Hong Lei said in Beijing.

In a speech at a business forum in Manila ahead of the summit, Chinese President Xi Jinping did not directly mention the territorial disputes.

But he did call on Pacific nations to "resolve our differences through dialogue and consultation"."We must focus on development and spare no effort to foster an environment of peace conducive to development and never allow anything to disrupt the development process," he said.

Obama's speech to the business forum focused mostly on the need for the world to tackle global warming, insisting fighting climate change would not hurt the economy."We have to break out of the mindset that when we are doing something about climate change, we slow growth," Obama said.

Obama met with the leaders of the other Trade- Pacific Partnership nations on the sidelines of APEC on Wednesday.

But in his speech, Xi urged Asian economies to sign up to its own free trade agreement, warning rival pacts risked hurting the regional economies."With various new regional free trade arrangements cropping up there have been worries about the potential of fragmentation," Xi said."We therefore need to accelerate the realisation of FTAAP and take regional economic integration forward." The FTAAP is the Free Trade Area of the Asia- Pacific, which China launched as APEC host last year.

Still, at an evening reception for the leaders, Obama and Xi held an apparently relaxed discussion, with both of them smiling and standing close to each other.

Obama's trip to Asia is the ninth of his presidency so far, and he had hoped it would showcase US commitment to the region and not just on the Middle East or Europe.

But once again his pivot has been blunted by events elsewhere, with Paris mourning the loss of at least 129 people in a rampage claimed by the Islamic State (IS) group.

A draft of the APEC declaration due to be released on Thursday and seen by AFP condemned the Paris attacks, describing them as "atrocities that demand a united voice from the global community".

Philippine authorities, which had already deployed more than 20,000 security forces for the summit, said security had been ratcheted up even higher because of the Paris attacks.