A handout photo. A Chinese air-rifle athlete endured aggressive bullying after her disappointing finish at the Tokyo 2020 Olympics.

A Chinese Olympic athlete who did not make the air-rifle final was abused online before Chinese censors intervened and suspended 33 accounts.

The woman air-rifle contestant, Wang Luyao, placed 16th in the 10-metre air-rifle qualifying round, a disappointment for her considering she was a top medal contender for the Tokyo 2020 Olympics.

After the match, she posted a selfie of herself in black pyjamas with the caption: “Sorry everyone, I admit I chickened out”.

What followed was a flood of abuse from the Chinese internet, with people asking her questions like, “Why not reflect on your failure? What purpose do you have for releasing an arrogant selfie?”

Another person wrote: “You did not spend time thinking about why you failed, but immediately posted a selfie on Weibo. It seems you desire to be famous.”

The backlash prompted Weibo to publicly announce it had banned 33 accounts from using the platform for between 90 and 180 days. 35 comments attacking Wang were also deleted.

However, as fierce as the criticism was, many more people came to her defence.

The hashtag “Wang Luyao is still an amazing Zhejiang girl” harnessed 480 million views on Weibo and 100,000 comments as of Monday (July 26) night.

“To win or to lose is normal. To train hard and love life is the best portrayal of athletes in the new era. Wang Luyao will achieve better results in the future,” said People’s Daily, a nationalistic news outlet, on Weibo.

In a social media post released on Sunday (July 25), Wang explained she used the words “chickened out” because she was nervous competing on the global stage that is the Olympic Games.

“I have failed and I will start from the beginning. I will never give up nor be defeated. So I will be back in Paris,” she wrote in her new post, winking at the 2024 games that will be held in Paris, France. 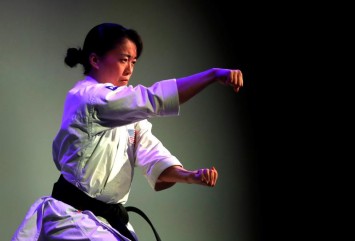 China has a history of placing excessive pressure on athletes to achieve Olympic medals, viewing it as a symbol of national prowess on the global stage.

At the 1984 Los Angeles Games, Zhu Jianhua, a high jumper who had broken world records, received a bronze medal, instead of the expected gold, and angry residents in Shanghai smashed the glass windows of his home and others sent him blades in the mail.

Four years later, when Li Ning, called China’s Prince of Gymnastics, did not achieve any medals at the Seoul Olympics, he received piles of letters cursing him.