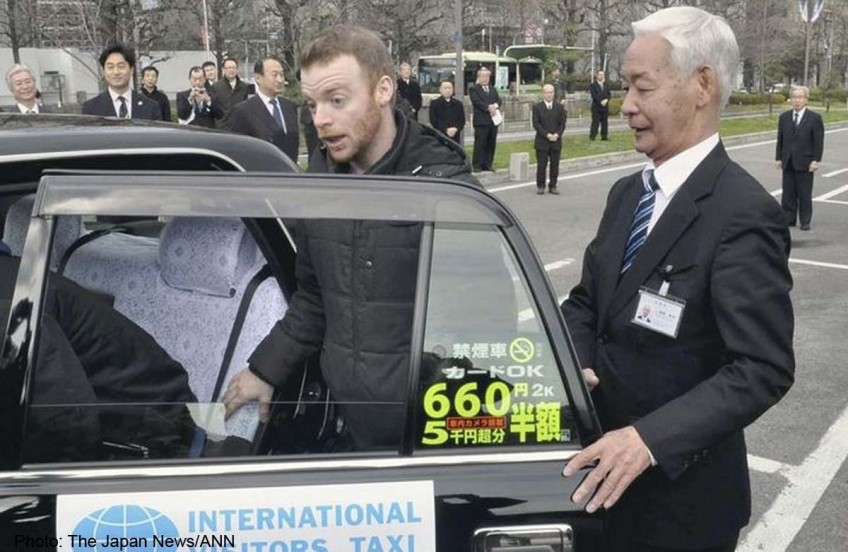 A driver shows a passenger to his cab, which boasts an International Visitors Taxi sticker, in Chuo Ward, Osaka.

OSAKA - To help improve taxi services for the growing number of visitors to Japan from overseas, Osaka taxi organisations have launched a study involving 10 drivers proficient in foreign languages, with their overseas passengers asked to evaluate the cab service in Osaka. The study will be used in the introduction of a system where cab drivers can become certified as "Drivers for International Visitors" after a weeklong assessment of their foreign language skills and hospitality. The service plans to expand to over 50 taxis for overseas visitors in the future.

The study began on March 4, and an opening ceremony was held at a taxi station in Osaka Castle Park in Chuo Ward.

Ten drivers were invited from various companies to study English conversation skills and trends among overseas tourists to Osaka before participating in the study. The drivers then affixed an International Visitors Taxi label to the rear doors of their cabs and went out on call. Since cab drivers frequently fail to understand the destinations specified by their overseas passengers, the study asked passengers upon arrival at their destination about their satisfaction with their driver's conversational skills and their general impression of the ride. The study also noted the drivers' thoughts on potential issues.

"Taxis in Japan are so clean, and the drivers are so nice," said Paul Devine, 31, a visitor from Ireland who took a ride in the taxi driven by the head of the study. "But their English skills frequently aren't up to par. It would be more comfortable if more drivers understood the language more."

The service was planned by a foundation committee of Osaka International Taxi, which comprises Osaka Taxi Center, a public interest incorporated foundation, the Kinki Transportation Department and others. The committee was launched in March 2014.

The committee hopes to certify drivers with exceptional language abilities as Drivers for International Visitors by this summer. It will also use the results of the study to determine the time and training content required to develop English conversational skills necessary for certification, as well as basic standards for foreign language ability.

As the committee proposed, on Feb. 28 signboards introducing the service in English and Chinese were posted at a newly opened taxi stand in front of the Sakurabashi exit of JR Osaka Station.

Overseas passengers might be unaware that the doors on Japanese taxicabs open automatically and passengers could accidentally hit another car with their door should they try to open it themselves. Therefore, stickers warning passengers about the doors will also be posted inside cabs starting this month.

According to Osaka Prefecture, approximately 2.62 million overseas visitors came to the prefecture in 2013, a 10-year record, and those numbers have been increasing. Osaka has approximately 19,000 taxicabs in service.

"The advantages of taxis are that we can speak directly with visitors, and visitors can go as they like from attraction to attraction," said Kanji Ando, head of the training institute at the Osaka Taxi Center. "We hope to develop drivers with language ability and keen insight on sightseeing spots, and in turn increase the appeal of Osaka as a tourist city."