Over 2,000 flee as volcano in the Philippines spews ash 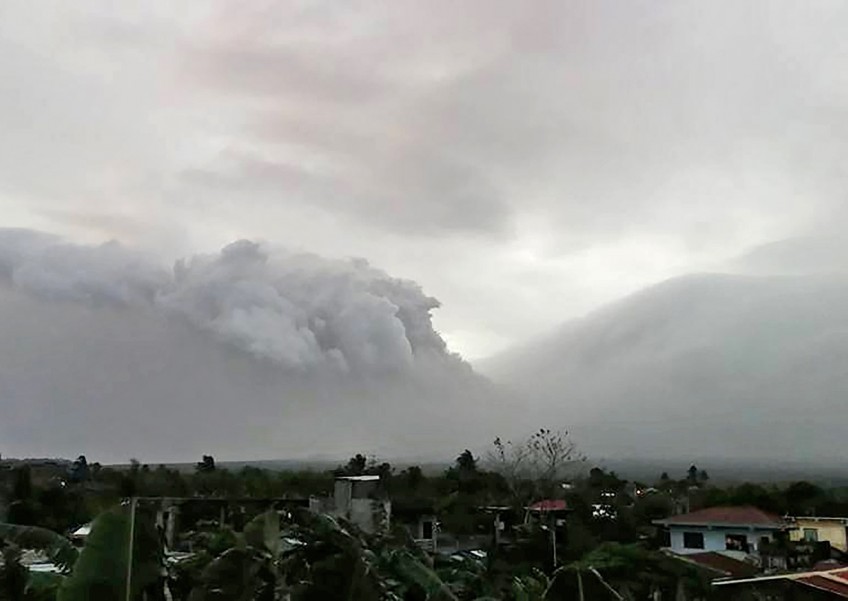 GUINOBATAN, Albay - More than 2,000 people hurriedly left their homes at the foot of Mount Mayon as the volcano started belching ash and smoke over the towns of Guinobatan and Camalig in Albay province.

Residents said they heard a rumbling sound before the air started smelling like sulfur late Saturday afternoon when the strong winds blew the ash and smoke from Mayon to the southwest.

The volcano is a tourist attraction in Albay because of its near-perfect cone shape.

Saturday's phreatic, or steam-driven, eruption was followed by three more on Sunday, sending 2,018 people, or 630 families, to evacuation centres.

Alert Level 2 means that the current unrest is probably of magmatic origin, which could lead to more phreatic eruptions or eventually to hazardous magmatic eruptions, Phivolcs said in a bulletin.

The warning was raised after the volcano spewed grayish steam and ash plume, reaching a height of 2.5 kilometers, in a phreatic eruption that lasted an hour and 47 minutes starting 4:21 p.m. on Saturday.

Residents are forbidden from entering the 6-kilometer radius permanent danger zone to avoid harm from explosions, rockfall and landslides that may occur in the area.

Those within the slope of the volcano, but outside the danger zone, were told to take precautionary measures against possible roof collapses due to accumulated ash and rainwater.

Phivolcs recorded 37 rockfalls on Sunday. It also advised civil aviation authorities to tell pilots not to fly close to the volcano's summit as sudden eruptions could be dangerous to aircraft.

The Civil Aviation Authority of the Philippines (CAAP) issued a notice to airmen directing pilots and flight operators to avoid the vicinity of Mayon.

The notice issued at 9:12 p.m. on Saturday warned of the existence of a 2,500-meter ash cloud moving southwest.

On Sunday night, Phivolcs raised the status to Alert Level 3 - which means it has an increased tendency towards eruption,less than 24 hours after Alert Level 2 (increasing unrest) was raised.

Ed Laguerta, Phivolcs Bicol chief, said that they were still unable to determine the distance of the lava flow because of the clouds. But the brighter crater glow is an indication of lava.

"The brighter glow of the crater is an indication of the initiation of lava flow on the southern slope of the volcano," Laguerta told Inquirer. "We cannot determine the distance yet because of the thick clouds."

Laguerta said that because of the raising of the alert status, the danger zone is now extended to the 7-kilometer radius of the volcano.

The notice was to take effect until 9 a.m. on Sunday, but the CAAP extended it to 9 a.m. Monday due to the continuing phreatic eruptions and ashfalls.

Mayon's most destructive eruption was in February 1841, when lava flows buried a town and killed 1,200 people. The volcano last erupted in 2014, spewing lava and forcing the evacuation of thousands of people.

The volcano appears due for another eruption as it has been displaying abnormal behaviour since late last year, said Phivolcs chief Renato Solidum.

In Guinobatan, the villages of Tandarora, Maninila and Travesia also experienced ashfall.

Medical teams are on standby to attend to the needs of evacuees in Guinobatan.

Ellen Padua, 37, of Maninila village, said an explosion-like sound was heard around Mayon on Saturday afternoon.

She then went out to check the volcano and saw the clouds around it had turned black.

"After several minutes, the bell rang four times. For us, it is a call sign or alarm telling us to evacuate," she said.

Despite the difficulty of having to transport her eight children and two elderly relatives with her to the evacuation centre, Padua made the effort.

"We felt very frightened. When Mayon erupts, it is sure [to be] damaging, very damaging. That's why we did not hesitate to evacuate," she said.

Plants along the narrow road to Maninila were covered in ash.

The weather, cloudy since last week, made it almost impossible to see another possible eruption.

"At first, we did not realise that there was an eruption. I just noticed that the air was irritating my eyes, so I told my children to stay inside," said Chona Neo, a resident of Maninila.

Some residents did not wait for the local government to evacuate them.

Janet Berquillo, 47, hailed a tricycle to the evacuation centre on her own, bringing along her children and a few clothes.

Residents said they were used to evacuation because of typhoons, but leaving their home due to Mayon's eruption was different.

"Storms last only a day or two, but once Mayon displaces us, we do not know for how long our stay in evacuation sites would be," said Euphricia Paliza, 72.

Roger Mendoza, 40, a village guard, was sleeping near the 6-km danger zone on Saturday night when it rained small rock fragments around 11 p.m.

His wife and their daughter were on their way back to Maninila from the evacuation centre just an hour after another phreatic explosion at 8:49 a.m. on Sunday.

"We have to go back to check our belongings. We did not have much time to put everything in place before we evacuated last night," the Mendozas said. "It was all so sudden."

Residents of Maninila could still freely go back to their homes as of Sunday.

Salvacion Paliza, 56, also a resident, said before the eruption she had noticed several indicators of abnormal volcanic activity.

"The water level in our deep well decreased. Even the Jetmatic pumps produced only little water," she said.

She said temperatures rose in November and December last year, unusual for the season when chilly weather was expected.

Claudio Yucot, Office of the Civil Defence Bicol director, has ordered residents not to engage in any form of human activity, especially within the 6-km danger zone.

"We will strictly monitor the area. We are after the safety of every individual and zero casualty is our goal during any kind of disaster," he said.

Cedric Daep, head of the Albay Provincial Disaster Risk Reduction and Management Office, said those in evacuation centres may be allowed to return to their homes later in the day, unless Phivolcs raised the volcano alert level further.

Daep said not all residents evacuated lived inside the 6-km danger zone.