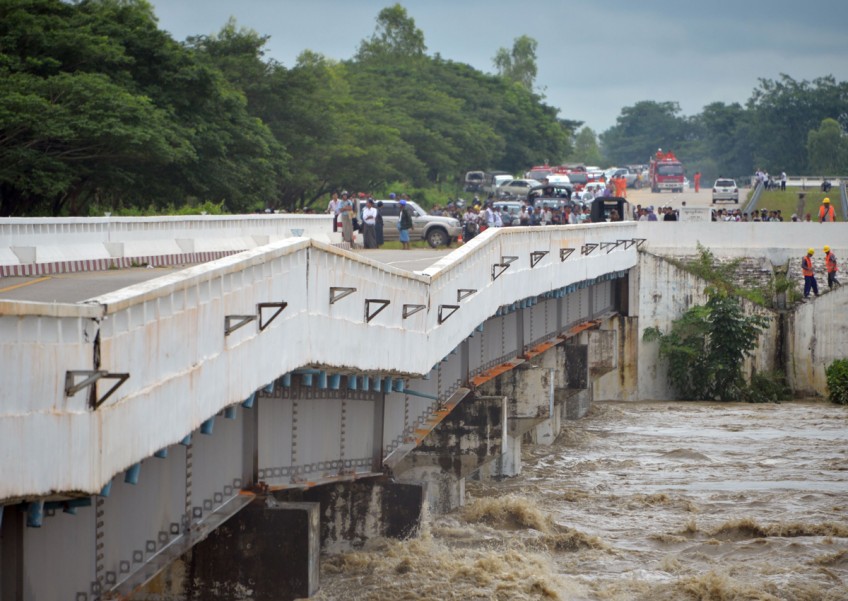 YANGON - More than 5,000 people have evacuated their homes after water from a breached dam flooded communities in central Myanmar on Wednesday and blocked part of a highway linking the main cities of Yangon, Mandalay and the capital Naypyitaw, officials said.

The Myanmar Fire Services Department dispatched a fire brigade to the Swar irrigation dam after it breached at 5:30 a.m. (2300 GMT), sending water into the nearby town of Swar and two villages.

"The (spillway) of the dam was broken and flooded the two villages close to the highway road," the fire department said on its Facebook page.

"Over 5,400 people have moved to monasteries and safe areas in Yedashe township," said Chan Nyein Thu, staff officer at the regional department of disaster management.

More than 1,500 people were sheltering in unaffected Thagaya town, said an administrator there, Aung Hla Min.

Another 1,500 evacuees from at least four different villages near the dam were staying at a Buddhist monastery nearby, said Yedashe firefighter Kaung Myat Thiha.

Mya Min, 67, told Reuters by phone at about 2pm that water had stopped flowing out of the breached dam.

"You can see there is only one-third of the normal amount of water left in the dam," he said.

Myanmar government spokesman Zaw Htay said there were no casualties reported as of early afternoon.

Authorities were working on "relocation and prevention" and using old roads to allow travel in the area, Zaw Htay said in a text message.

Fire officials closed a bridge on the Yangon-Mandalay highway bridge over the Swar creek. Pictures posted on the department's Facebook page showed water rushing within a few feet of the underside of the bridge.

"The water is not over the bridge but the flow under the bridge is very strong," said Min Min, a journalist based in Naypyitaw who was on the scene.

The Myanmar army's commander in chief, Min Aung Hlaing, and Vice President Henry Van Thio were briefed on the incident by local officials, according to social media posts that showed them visiting the dam and the flooded area.

The dam was built across the Swar creek in 2004, can store 216,350 acre-feet of water and irrigates more than 20,000 acres of farmland, according to a Ministry of Agriculture and Irrigation document posted online.

Myanmar's heavy annual monsoon rains have caused widespread flooding that displaced more than 100,000 people and killed at least 11 in July this year.

The Myanmar government is weighing a number of dam projects that would generate electricity to address chronic power shortages, but the projects are controversial due to their potential environmental impact.

A hydroelectric dam collapsed in neighbouring Laos last month, displacing thousands of people and killing at least 27, highlighting the safety concerns over many dams in Southeast Asia.