Over 50,000 convicts freed in Indonesia 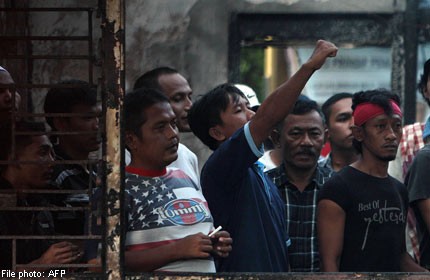 Indonesian prisoners gather behind the window of the burned Tanjung Gusta prison building.

INDONESIA - As many as 54,396 convicts across the country had their sentences reduced for Idul Fitri, of that number a total of 841 were set set free. However, none of the individuals involved in the recent riot at a Tanjung Gusta prison received any leniency, an official said on Thursday.

Special remission is granted on national and religious holidays such as Idul Fitri, Christmas and Independence Day.

"Those involved in the Tanjung Gusta and Batam prison incidents did not receive any reduction," Akbar said. "They are currently undergoing sentence disciplinary penalties."

In mid July, a deadly riot took place at Tanjung Gusta Penitentiary in Medan; resulting in more than 200 prisoners fleeing from the prison. The inmates set fire to the prison and five people - two prison guards and three inmates - died after being trapped in one of the rooms on fire.

Just a week after the Tanjung Gusta incident, 12 inmates escaped from a prison in Batam, Riau. They fled through broken windows and doors after assaulting two prison guards.

"The escaped convicts might be considered for a sentence reduction next year if they show remorse and are well behaved," Akbar said.