Pacquiao vs Duterte for president: A title bout the Philippines can't stop watching

Eight years ago, world boxing champion Manny Pacquiao set his sights on a goal outside the ring: the Philippine presidency. Little did he know that in President Rodrigo Duterte, he would face his toughest opponent yet.

He couldn’t do it immediately; he was in his mid-30s at the time, and the country’s constitution specifies that presidential candidates must be at least 40 years old on election day. So he took his time, preparing for the upcoming political battle as methodically as he had for his 71 career bouts.

Pacquiao first flirted with public office in 2007, but his run for Congress in the province of South Cotabato was stopped in its tracks by Darlene Antonino-Custodio, who graciously said Filipinos were not prepared to lose their boxing icon to the country’s chaotic politics.

Instead of swearing off politics, he studied the landscape and bought a farm in his wife’s home province of Sarangani, which qualified him to run for that congressional district. After a resounding victory in 2010 – by which time Pacquiao had formed his own party, the People’s Champ Movement – he funded a full slate of candidates in the province, from governor to legislative council. He also fulfilled his campaign promise to build the first hospital in Sarangani, using government money promised by then president Benigno Aquino III.

Fresh from victory, Pacquiao took a 10-day governance course at the Development Academy of the Philippines, and asked Ilocos Sur provincial governor Luis “Chavit” Singson – the prominent political warlord who helped bring down Joseph Estrada’s presidency in 2001 with his damning court testimony the previous year – to teach him “political boxing”.

Basking in the glow of becoming Pacquiao’s guru, Singson in June 2010 told local media that among the lessons he had imparted to the political neophyte were “have discipline”, “have a killer instinct”, “don’t talk too much” and “do what you are saying”.

Pacquiao also cleaned up his act, giving up womanising and gambling. He became a born-again Christian in 2010, and went on to become a preacher, too – and even completed a bachelor’s degree in political science in 2019.

It was all coming together. Pacquiao would be 43 by the time of next year’s presidential election, ready and eligible to run. He was known not just across the Philippines, but around the world. He was the real deal who had boxed his way to global greatness and a net worth of US$220 million, while learning how to take a punch himself.

There was no way, it seemed, that a man who stopped traffic every time he had a boxing match could lose – a man admired by foreign leaders and royalty, running for office in a celebrity-obsessed nation.

That was until last month, when Pacquiao ran into an unexpected contender by the name of Rodrigo Duterte.

In mid-June, Duterte’s aides suggested that the president – who is constitutionally restricted to a term of six years – could still run for the post of vice-president next year, and choose his running mate. But not only did they indicate that this would not be Pacquiao, there were rumblings that if the boxer-senator did not cooperate, they might even unseat him from his post as acting president of the PDP-Laban Party next weekend, when the party was set to hold a national assembly. 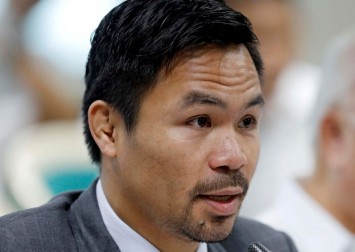 Pacquiao responded with a series of jabs. First he said the July 17 meeting would be illegal under PDP-Laban’s by-laws. Then he urged party mates to boycott it even though it was Duterte, its chairman, who had ordered it convened. Next, he sought a meeting with Duterte to clear up any misunderstandings; at least one source said it had taken place but led nowhere.

On June 22, Pacquiao aimed another blow at Duterte’s war on drugs, which has been the centrepiece of his presidency. “If by chance the time comes when I make the decision [to run], believe me, my advocacy would be declaring war against corruption,” he said in a radio interview. “I think declaring war against corruption is bigger than illegal drugs.”

It was a dramatic about-face for Pacquiao, who had fully backed the war on drugs and in 2016 played a primary role in unseating Senator Leila De Lima from the powerful anti-graft Blue Ribbon Committee which was probing extrajudicial killings by policemen during drug busts.

He had even defended the Philippine leader that year after then US president Barack Obama criticised Duterte’s bloody crackdown . “We want to stop all the drugs in the Philippines,” Pacquiao said, adding that he fully backed the campaign.

Duterte – who like Pacquiao prides himself on having been a street tough in his youth – fired back. On June 28, he warned that he would campaign against Pacquiao if the latter failed to prove his allegations of corruption. And three days later, as if addressing a wayward child, the president advised Pacquiao to just “sit in Congress, finish [your duty as a senator] and find out about the corruption you are talking about”, before continuing in typically foul-mouthed fashion. 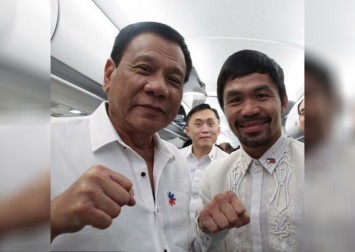 Two days later, Pacquiao responded by calling a digital press conference in which he claimed that 10.4 billion pesos (US$207,000) of pandemic aid had gone missing, while alleging there were anomalous transactions at government agencies. He did not provide evidence, though he told reporters to wait for more revelations after he returns from training in the United States, where he is set to fight next month.

However, this left him open to a counterpunch from Duterte, who last week brought up an unresolved income tax case against Pacquiao over his winnings.

“I remember he has a tax evasion case and he has been assessed to pay 2.2 billion pesos, that’s what he still owes the government for all his fights,” Duterte said, adding that he had raised the issue because Pacquiao “said we are corrupt. If we are corrupt, how about you? When you cheat the government, you are a corrupt official.”

While most PDP-Laban partymates have avoided stepping into the ring with Duterte and Pacquiao, some have chosen to speak up – including founding member Lutgardo Barbo.

Speaking to This Week in Asia, Barbo said the “party apparently is in tatters” over what is happening.

“Something is wrong with the direction of the leadership,” he said, adding that it would be wrong to field Duterte as the vice-presidential candidate next year and wrong to allow him to choose his running mate.

Barbo said he had not made up his mind whether to support Pacquiao’s presidential bid, and acknowledged he had been “scammed” by Duterte into supporting him in 2016.

“When Duterte said ‘Give me three to six months, I will stop corruption’, we all clapped like chimpanzees,” he recalled. “We did the same when he said ‘I will ride a jet ski and put up a Philippine flag [on Scarborough Shoal, over which Manila is in dispute with Beijing]. We believed him then because he said it with a straight face.”

“Apparently, [Pacquiao] appears to be sincere, [but] I might be wrong again just like I was wrong with Duterte,” he said.

However, Barbo said that at this point, he could not tell whether Pacquiao and Duterte were seriously fighting or merely engaging in “shadow boxing”. For his part, Pacquiao revealed during his July 3 online press conference that he had received feelers from other political parties to join them.

To Barbo, the way Pacquiao handles this political controversy will affect his political future, but “it will not define him nor his direction as a candidate”.

As if to prove that point, Pacquiao on Friday showed he was very much still in contention with a triple jab that stunned his opponents within the ruling party.

PDP-Laban spokesman Ronwald Munsayac said that just before flying to the US, Pacquiao had signed three resolutions in his capacity as president. The first expelled from the party three senior officials who had been doing Duterte’s bidding; the second formed a committee to investigate those who had been harmful or disloyal to the party; while the third voided the planned national assembly next week that could have seen Pacquiao unseated.

All three were backed by the National Executive Committee, which runs the party and is headed by Pacquiao. Munsayac also released a poster of Pacquiao urging the public to report all instances of corruption in the Duterte government to him.

Far from looking like a man on the ropes, it would seem Pacquiao is ready to rumble – and prove just who is the toughest man in the Philippines.