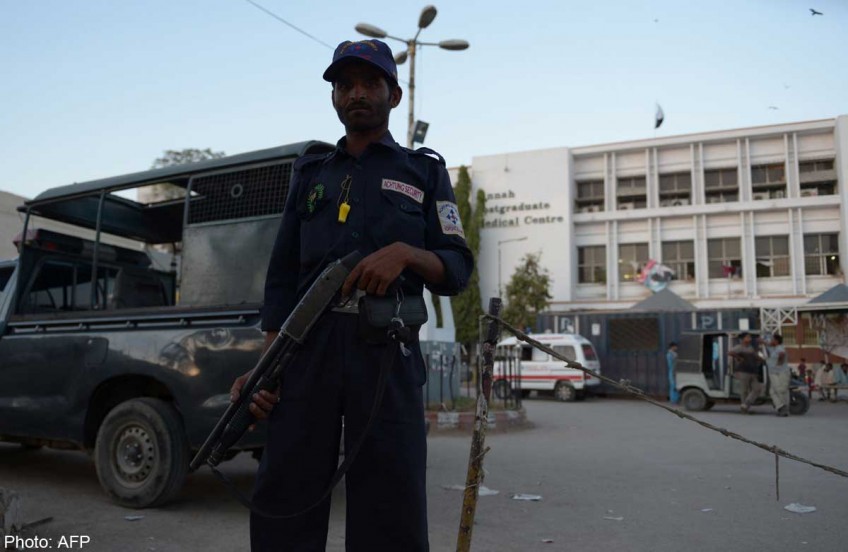 PESHAWAR, Pakistan - When Pakistani doctor Mehmood Jafri gets ready for work in the morning, the first thing he does is put his AK-47 in the car.

Then, after briefing the armed guards at his home, he sets off for the hospital where he works in the troubled northwestern city of Peshawar with his most trusted relative beside him as an escort.

After surviving one murder attempt and one kidnap bid, Jafri takes no chances with his personal safety.

He is one of hundreds of Peshawar doctors living with the daily threat of being killed or abducted for ransom by Taliban militants or criminal gangs.

The doctors' association in Khyber Pakhtunkhwa province, of which Peshawar is the capital, estimate that in the past three years around a dozen doctors have been killed and more than 30 kidnapped, while up to 3,000 have fled in search of a peaceful life elsewhere.

Guns have become as important as stethoscopes at clinics and guards watch over doctors' homes.

Doctors are seen as relatively easy targets in Pakistan. They are well paid, but often lack the protection of influential connections that wealthy businessmen might enjoy.

"I was lucky that I survived two attempts because I sensed the threats moments before they tried to attack me and I escaped," Jafri told AFP as he finished surgery at Peshawar's main hospital.

"Many other colleagues were not so lucky and they were either shot dead or kidnapped."

Provincial health minister Shehram Khan Tarakai confirmed the kidnapping of 30 doctors and the killing of "a couple".

The problem is not confined to the northwest -- the medics' association in Karachi, Pakistan's largest city, says 20 doctors have been killed in targeted attempts in the past 14 months while 10 have been kidnapped in two years.

AFP has changed the names of all the doctors in this story for their own safety.

Kidnapping leaves most of the medics deeply traumatised after their release and unwilling to speak about their experiences for fear of retribution from their abductors.

"They stop interacting with others and restrict themselves to their homes and clinics as the kidnappers tell them they will find them if they ever reveal any details at all," Doctor Amir Taj Khan, senior vice president of the Provincial Doctors Association, said.

"They don't even come to our meetings. It's impossible for them to tell their stories publicly even if you pay them 100 million rupees (S$2.2 million)."

Khan said that of the 32 doctors who had been kidnapped, only two had confided in him what had happened to them.

They told of being tied up with ropes and taken to lawless North Waziristan, for decades the stronghold of Al-Qaeda and Taliban militants.

With the military wading in with artillery barrages and air strikes on insurgent positions, kidnappers and kidnapped became scared, never knowing if the next shell would kill them.

One detainee was moved repeatedly, Khan said, until finally an $80,000 ransom was agreed for his release.

Even the best-laid security arrangements do not always work. One doctor said his kidnappers simply disarmed him and he ended up paying $130,000 for his release.

Most doctors in Khyber Pakhtunkhwa now simply pay off the Taliban and criminal gangs, Khan said, making the extortion and kidnapping business a hugely lucrative revenue-earner for militants.

"Almost 100 per cent of senior doctors pay extortion to avoid kidnapping and killing -- they know there is no other way to survive," Khan said.

"I am paying extortion since 2010. I know I am doing wrong but there is no other solution, security forces are unable to protect us," Afridi told AFP.

"I have to keep Taliban happy for my own security and security of my business. Besides the monthly fee, I pay them around $5,000 when they demand more money for 'special assignments'," he said.

Afridi says he is sometimes taken to the tribal areas for the treatment of Taliban commanders.

"They know everything about everybody. Many Taliban visit our clinics in the disguise of patients and assess how rich we are, so we have to abide by their demands," Afridi said.

The pressure has become too much for many doctors and a steady stream have left Khyber Pakhtunkhwa, putting further stress on an already weak healthcare system serving an extremely poor part of Pakistan.

"Up to 20 doctors are moving out every month. I think around 3,000 have left (the province) within three years."

Aside from the extortion, there is a sectarian aspect to the doctors' plight.

Most of those targeted, including Jafri, are members of the Shiite Muslim minority that makes up around 20 per cent of Pakistan's population, which is predominantly Sunni.

Sectarian violence, mostly perpetrated by Sunni extremists, has risen sharply in recent years, with attacks on professionals such as doctors fuelling fears of a Shiite "brain drain" from the country.