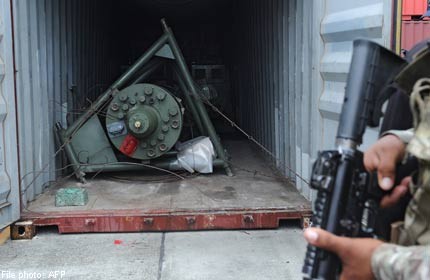 PANAMA CITY - The Panamanian prosecutor investigating the case of a North Korean ship loaded with Cuban weapons has finished his probe and will present his conclusions next week, officials said.

Prosecutor Javier Caraballo will deliver his report next week, Panamanian Attorney General Ana Belfon said late on Friday. Belfon gave no indication as to what would be in the report.

A source close to the case, speaking on condition of anonymity, told AFP that the North Korean government will soon be sending to Cuba "a mission of four people that will await the decision taken by Panamanian courts". The small team - a ship captain, an assistant, a communications technician and a naval representative - "will sail the ship to North Korea once the crew, or part of it, have been released", the source said.

Both Havana and Pyongyang said they were obsolete Cuban arms being shipped to North Korea for refurbishment under a legitimate contract.

The communist allies did not explain why the items were buried under more than 200,000 sacks of sugar. The ship's crew of 35 faces up to 12 years in prison if convicted on arms trafficking charges.

The sailors are being held at Fort Sherman, a former US military base.

The Panama Canal Authority announced in September that it had slapped a US$1 million (S$ 1.24 million) fine on the ship. In August, the Panamanian government said the United Nations had determined that the shipment violated sanctions against arms transfers to North Korea.

The sanctions were imposed over the reclusive country's controversial nuclear programme.

Mr Julio Berrios, the attorney representing the North Koreans, claimed that the containers were sealed when they were placed aboard the ship in Cuba.

"Neither the captain nor the rest of the crew knew what was in them because they were not informed," Mr Berrios told AFP, insisting they all be set free.