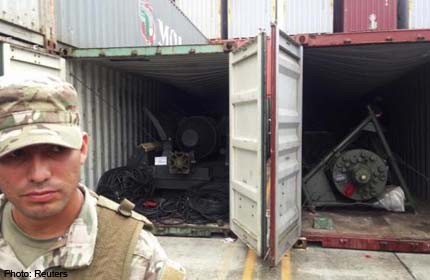 PANAMA CITY - The North Korean sailors whose dilapidated ship was halted near the Panama Canal and found to be carrying military equipment could face up to six years in jail, a prosecutor has said.

The 35-man crew of the Chong Chon Gang - which was stopped as it approached the major waterway last Friday - are in custody at a former United States military base in the port of Manzanillo in northern Panama.

The Soviet-era weaponry, discovered among tonnes of sugar during an anti-drugs search, belongs to Cuba and was being taken to North Korea for repair, the communist allies have said.

"This type of behaviour could carry a sentence of between four and six years," he said, noting that the crew are staying silent.

"They took up their right not to testify," he said, standing next to the seized ship in Manzanillo.

Panama on Monday said it had discovered the shipment after impounding the vessel and conducting a drugs search. The ship's captain tried to kill himself and the crew rioted, according to Panama's President.

The crew remain in custody at Fort Sherman military base and "are in perfect health", according to Mr Caraballo.

North Korea has demanded the vessel's return, saying the shipment formed part of a legitimate deal with Cuba.

"The cargo is illegal because it was not declared. Anything that is not logged, even if it is obsolete, is contraband," said Panamanian Security Minister Jose Raul Mulino.