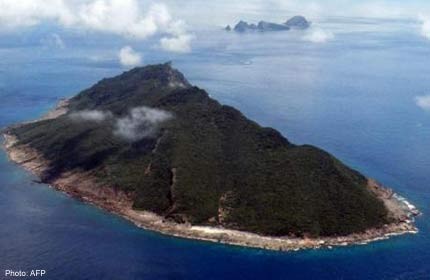 <p>The string of islands in the East China Sea involved in the dispute.</p>

A panel tasked with reviewing the government's constitutional interpretation of Japan's right to collective self-defence will propose law revisions to allow the use of weapons in such cases as low-level conflicts over remote islands that may not involve actual armed attacks, according to sources close to the matter.

The Advisory Panel on Reconstruction of the Legal Basis for Security assumed several scenarios for the latest proposal, such as the occupation by an armed foreign national of remote Japanese islands, including the Senkaku Islands in Okinawa Prefecture, and a sudden clash with forces from another country.

The panel was originally established under the first Cabinet of Prime Minister Shinzo Abe in May 2007.

In a June 2008 report, the panel proposed the government's constitutional interpretation be altered to enable Japan to exercise the right to collective self-defence under four categories of contingencies, such as launching a counterattack when a US military vessel is attacked.

Following the inauguration of the second Abe Cabinet, the panel was reconstituted in February with the same 13 members, chaired by former Ambassador to the United States Shunji Yanai.

Abe asked the panel to examine and discuss various national security issues beyond the four categories of contingencies suggested in 2008.

Under the current Self-Defence Forces Law, an order to mobilize SDF units based on the right of a sovereign state to individual self-defence can be issued only when the country is under armed attack by another country, or facing clear and imminent danger of attack.

The government's interpretation defines armed attack as "organised, planned use of military force from outside," and such cases as an occupation of a remote island by an armed foreign national or an unexpected clash fall outside that definition.

The existing law allows the dispatch of the SDF on emergency missions and maritime patrols to protect property and rescue Japanese nationals. However, due to time-consuming formalities and restrictions on weapons use, it is considered unlikely the SDF could promptly and effectively respond to events such as those described in the panel's latest proposals.