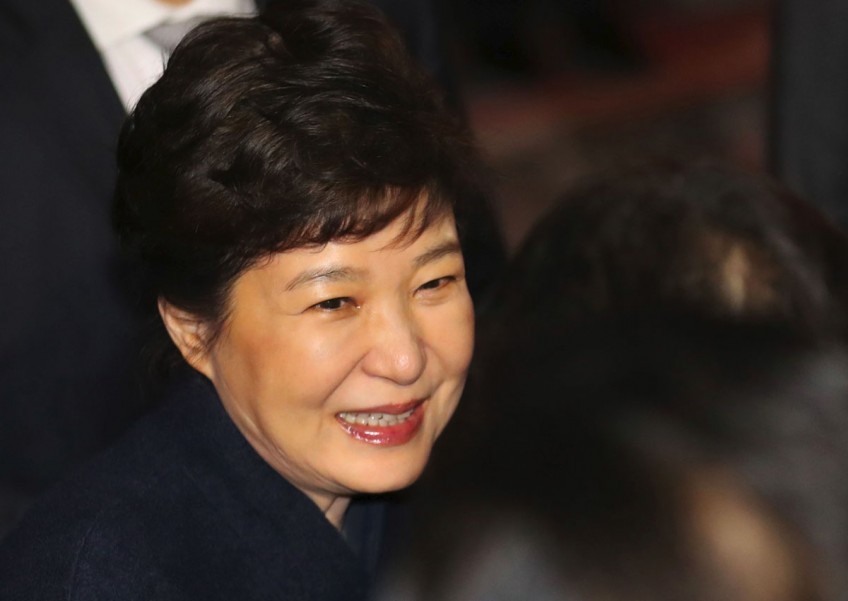 Former President Park Geun-hye left the presidential office, Cheong Wa Dae, to return to her private home Sunday, two days after the top court expelled her over a corruption scandal.

"I am sorry that I couldn't complete the mission that was bestowed upon me as president," Park was quoted as saying to her supporters who greeted her in front of her old home in Samseong-dong, southern Seoul, in the evening. Park smiled, as she greeted and shook hands with them.

"I give thanks to the people who have trusted and supported me," she said through Rep. Min Kyung-wook, who was once her official spokesperson.

Vowing to "take all the consequences," Park also expressed disapproval of her impeachment and the set of corruption allegations raised against her.

"It may take time, but I have faith that the truth will come to light eventually," she said.

Although the Constitutional Court's ruling Friday had immediately stripped her of her presidential powers, Park stayed at the Blue House, or Cheong Wa Dae, an additional two nights.

Her inaction, along with her silence since the court ruling, was largely taken as a sign of complaint or even noncompliance.

Sparking further criticism of the reserved former president were the ongoing rallies by pro-Park groups, as some turned violent, raising concerns on further damage and a widening social divide. Since the court's ruling, three have died amid violent protests: two from heart attacks and another from being hit by a fallen object.

Moon Jae-in, a former chairman and the presidential front-runner of the main opposition Democratic Party of Korea, spoke up amid Park's silence.

"I believe it is the duty of former President Park Geun-hye to express her consent to the Constitutional Court's decision (on her impeachment)," Moon said in a press conference Sunday at the party headquarters.

Earlier in the day, the residential neighborhood of Samseong-dong was bustling as Park's long-empty home readied itself to become the impeached former president's new residence.

All throughout the morning, freight cars went to and fro, unloading bulky objects presumed to be furniture and electronic appliances, including a television set.

Earlier on, an unidentified man in a black suit entered the grounds, apparently making security checks before the arrival of the former state chief. A housecleaner was also seen sweeping the floors and wiping down windows.

Surrounding the house and the neighborhood were dozens of reporters and cameramen from local and foreign media, as well as some 800 police officers, all awaiting the imminent arrival of the former president.

Some of her closest aides, including Rep. Cho Won-jin of the conservative Liberty Korea Party and all of the former presidential chiefs of staff, gathered near Park's house, along with key members of an anti-impeachment civic group.

Park left Cheong Wa Dae at around 7:16 p.m. and arrived at Samseong-dong at around 7:40 p.m. She was greeted by tearful followers and supporters who had flocked to the area since early Friday afternoon, showing up in droves after her relocation was first reported at around 5 p.m.

Heading the welcoming committee was Rep. Suh Chung-won, an eighth-term lawmaker and symbolic chief of the pro-Park faction.

Over the weekend, Blue House officials took down the symbolic phoenix flag, which is typically hung at the main building to indicate the presence of the state leader.