Party's over with Goa to ban dance bars 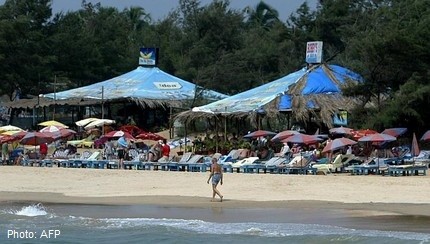 A tourist walks past a row of sunbeds on Baga Beach in Goa. India's popular holiday state of Goa has announced a ban on dance bars, further restricting the party scene in a destination once famous as a raver's paradise.

PANAJI - India's popular holiday state of Goa has announced a ban on dance bars, further restricting the party scene in a destination once famous as a raver's paradise.

The state has progressively tightened controls on nightclubs and outdoor parties over the last few years after a series of high-profile crimes including the rape and murder of a British teenager in 2008.

Chief Minister Manohar Parrikar, elected in the southwestern state last year, has made cleaning up Goa's palm tree-lined beaches a priority to make them more family-friendly.

"Dance bars will not be allowed in Goa. There has been a lot of image-beating for the state due to the existence of drugs and prostitution on the beaches. We will clean it up," Parrikar announced on Thursday.

His administration has initiated a string of measures to safeguard foreign tourists and has ordered police to remain present on the beaches until midnight. Previously police would withdraw after sunset.

Goa - once a laid-back hippy beach hangout known for drugs, free love and music - retains an image as a free-wheeling oasis in straitlaced India and draws 2.3 million foreign and domestic visitors annually.

But its sleazy and criminal sides were exposed in 2008 by the death of 15-year-old British teenager Scarlett Keeling, who was raped by two men and left for dead after she consumed a cocktail of illegal drugs at a beach cafe.

Her death prompted a crackdown on nightclubs and rave parties, with many forced to close or finish early.

"Silent discos" - in which party-goers wear headphones to listen to the music - have developed as a way to work around the restrictions on outdoor noise.

Local activists say prostitution has also mushroomed in the state in recent years.