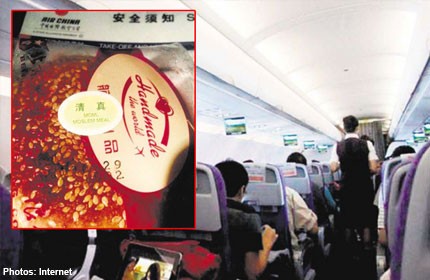 CHINA - Passengers on board an Air China flight were reportedly served expired food, leading to them experiencing severe diarrhoea and vomiting.

According to a report in Shin Min Daily, a woman from China, surnamed Zhang, had taken the airline with her family last week. They were travelling from Xinjiang back to Beijing.

After eating a beef biscuit served on the flight, Ms Zhang realised it had expired four days ago.

She then notified an air stewardess, and asked her to inform the other passengers about the expired food.

However, her request was rejected, and the expired food was not collected from those on the flight.

According to the report, half an hour later, members of the Zhang family experienced abdominal pain, and about 30 other passengers had symptoms of vomiting and diarrhoea.

The airline has since explained that the biscuits were not expired, and the date on the packaging was wrongly printed, the evening daily wrote in its report.

The airline also said that it would investigate, nonetheless.

A Sina video news report said this happened on flight CA 1268, and the food was allegedly supplied by the Fresh Air company.