A Hong Kong patient died in a medical blunder when a special tube used for feeding him and taking medicine to his stomach through the nose was wrongly inserted into his lung.

The hospital reported to the public the "sentinel event" on Wednesday.

The male patient, who suffered swallowing difficulties and desaturation - the condition of a low blood oxygen concentration - was transferred from Tai Po Hospital to Alice Ho Miu Ling Nethersole Hospital for treatment and feeding via nasogastric tube - a tube passed into the stomach via nose for use for nutritional support.

In the afternoon of November 23, the patient somehow pulled out the nasogastric tube by himself, said a hospital spokeswoman.

She would not speculate why the patient had pulled out the tube. The spokeswoman also declined to reveal the man's age and medical history, citing patient privacy.

But she stressed that after the tube was reinserted, an X-ray examination was performed and the patient's gastric juices were also tested for acidity in accordance with the prevailing protocol.

"No abnormalities were detected," said the spokeswoman.

Nasogastric tube feeding was restarted on the same night and in the early hours of November 24. But the patent subsequently developed cardiac arrest and had to be sent to the intensive care unit after resuscitation by clinical staff.

It was at this stage that the earlier X-ray results were reviewed and it was found that the nasogastric tube was inserted into the patient's left lung.

The patient's condition deteriorated and he died on Tuesday. 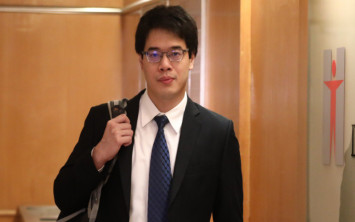 The case has been referred to the coroner for further follow-up.

In a statement on Wednesday, the hospital said: "The hospital is highly concerned about the incident and has reported to the Hospital Authority head office … A root cause analysis investigation will be conducted to look into the incident."

The investigation report will be submitted to the head office in eight weeks, according to the hospital.

The spokeswoman declined to say how many medical staff members were involved in the blunder or if any of them had been suspended or put off-duty after the incident. "We aim to review the work flow to see what did go wrong and how this could be improved."

"The hospital will maintain close communication with the patient's family, explain the investigation findings and provide them with available assistance," said the spokeswoman.