Pentagon chief to stress US 'pivot' in SE Asia tour 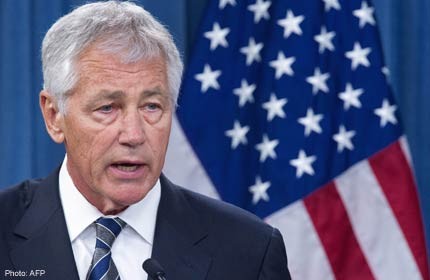 KUALA LUMPUR - US Defence Secretary Chuck Hagel kicks off a Southeast Asian tour on Sunday meant to stress Washington's so-called "pivot" back towards the Asia-Pacific but with attention diverted by trouble in the Middle East.

The Pentagon chief's week-long trip is part of a concerted effort by Washington to rebalance America's strategic priorities towards the Asia-Pacific.

But crises in the Middle East continued to demand Hagel's attention, particularly accusations that the Syrian regime had carried out a chemical weapons attack that left hundreds dead.

He told reporters aboard his plane that the US military had provided President Barack Obama with a range of options for possible intervention and forces had been redeployed as required.

With Egypt in turmoil after the ouster of president Mohamed Morsi and a subsequent crackdown, Hagel also spoke Saturday night to Egyptian army chief General Abdel Fattah al-Sisi about the volatile situation, US officials said.

On Sunday, Hagel is due to meet his Malaysian counterpart Hishammuddin Hussein as well as Prime Minister Najib Razak, before delivering a speech later.

US officials said Washington wanted to cultivate military ties with Malaysia and other governments in Southeast Asia to ensure stability in the region and to encourage a peaceful resolution of territorial disputes in the South China Sea.

China's assertive stance over the waterway has raised concerns in Washington.

Beijing claims virtually all of the South China Sea and has stoked rising concern among rival claimants, particularly the Philippines, of a gradual takeover of disputed islets.

The Pentagon is offering help to Southeast Asian countries with ships, aerial reconnaissance, joint training and other initiatives as they try to better monitor their coastal waters.

A senior defence official, briefing reporters travelling with Hagel, rejected speculation that budget cuts hitting the Pentagon's military spending would spell an end to the "pivot".

"There's a myth out there," said the official, who spoke on condition of anonymity. But he said "reports of the end of the rebalance, that we can't fund the rebalance, are greatly exaggerated".

"We have adequate means to support this strategy and to do so for the foreseeable future," the official added.

The United States was increasing the number of ships based in the Asia-Pacific and pursuing agreements with a number of countries to allow ships, aircraft and troops to rotate through key ports and airfields, while avoiding permanent American bases, the official said.

US defence officials are negotiating an accord with the Philippines to allow for the rotation of more US forces and military assets through the country on temporary deployments.

After his two-day stop in Malaysia, Hagel heads to Indonesia and then Brunei for a gathering of defence ministers from the Association of Southeast Asian Nations.

The discord in the South China Sea is expected to feature high on the agenda of the ASEAN discussions in Brunei on Wednesday and Thursday, officials said.

Hagel is due to meet his Chinese counterpart, General Chang Wanquan, on the sidelines of the ASEAN session, after having hosted the general in Washington earlier this month.