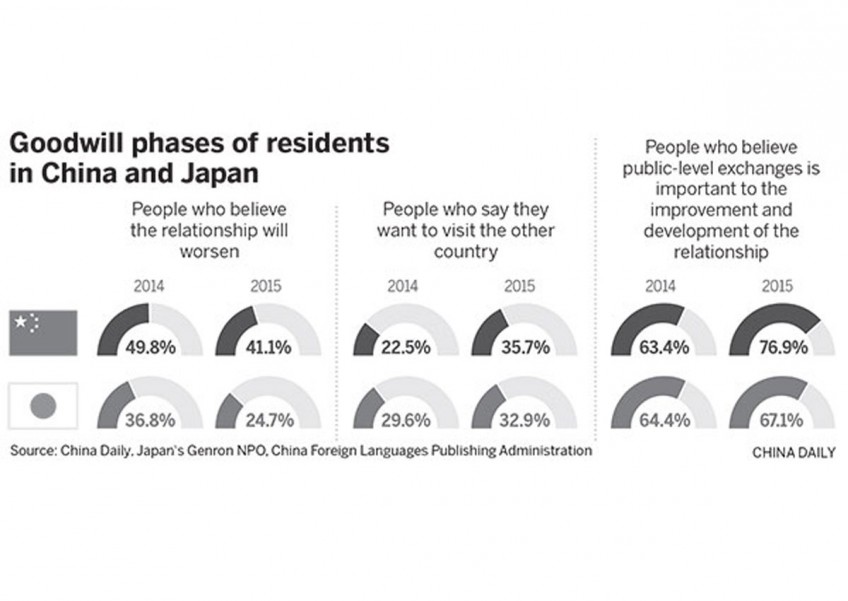 Hostility and pessimism between the Chinese and Japanese public is shrinking, while history and territorial issues continue to have a lingering negative impact, according to an annual survey released on Thursday.

Last year, 49.8 per cent of Chinese believed the relationship "will worsen", while the figure this year was 41.1 per cent.

Similarly, in Japan the figure dropped from 36.8 per cent to 24.7 per cent, according to the 11th China-Japan Public Opinion Poll co-hosted by the China Foreign Languages Publishing Administration and Japan's nonprofit think tank Genron NPO.

Alongside a travel boom to Japan among Chinese in the past year, 35.7 per cent of the surveyed Chinese this year said they "want to visit Japan", contrasting with the 29.6 per cent of last year.

Statistics also show that an over-whelming majority on both sides believe "public-level exchanges are an important step toward the improvement and development of the relationship".

After an intergovernmental agreement was released in November about improving the relation-ship, President Xi Jinping met with Japanese Prime Minister Shinzo Abe twice, and senior officials held high-level political dialogues in July and October to touch upon in-depth issues.

"There has been no outbreak of (major) sensitive issues, which could bring a downturn of our people's feelings, in the past year," Kudo said.

"You can find that an increasing number of Chinese people answered that they 'have Japanese friends' or 'have been to Japan', I think that also made a great contribution to the improvement of the impressions," Kudo said.

However, the territorial issue has turned out to be the top-and shared－concern of both the Chinese and Japanese public.

When asked about "the major issue obstructing the development of bilateral ties", 66.4 per cent of Chinese and the 56 per cent of Japanese chose "territorial disputes", according to the 11th China-Japan Public Opinion poll released in Beijing.

Abe released a statement on behalf of his cabinet on Aug 14 to mark the 70th anniversary of the end of World War II.

But Abe drew widespread criticism because he failed to apologise for Japan's wartime atrocities and only stated that his cabinet will inherit the positions of past cabinets.

"Chinese people may be disappointed by the Abe Statement and may wonder why the Japanese government took a position that is against UNESCO's decision to inscribe Chinese documents related to the Nanjing Massacre in its Memory of the World Registry," Wang said.