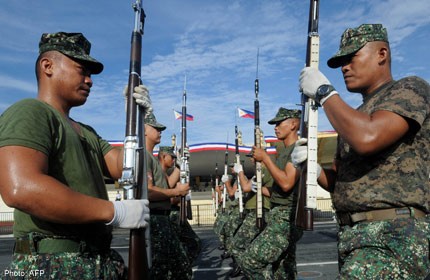 The 120,000-member armed forces had a history of coups and attempted coups. Last month, rumours sprang up of a plot against the Aquino administration because of the fund scandal.

"We should be reminded that as members of the Armed Forces of the Philippines, we should remain professional and non-partisan," military chief Lieutenant-General Pio Gregorio Catapang told troops at an air base in Pampanga province, north of Manila.

"The DAP (Disbursement Acceleration Programme) has become a political issue. We should allow the democratic process to take its course and let the judicial, the executive and legislative branches of government deal with this," he said. "We should not meddle (but) concentrate on our mission."

Aquino, the only son of the country's democracy icon, former president Corazon Aquino, is facing the biggest challenge to his four-year rule after his popularity ratings dropped to the lowest levels last month.

His Disbursement Allocation Programme was a 145-billion-peso ($3.34-billion) fund to boost public spending, but some of the money went to allies in Congress in violation of the constitution, the Supreme Court ruled.

Aquino has become politically vulnerable to his opponents who have mobilised street protests ahead of his State of the Nation Address before a joint session of Congress next week.

"You cannot discount the range of possible scenarios in which the plotters would resort to extra-constitutional measures," said Ramon Casiple, executive director of the Institute for Political and Electoral Reforms, an independent advocacy group.