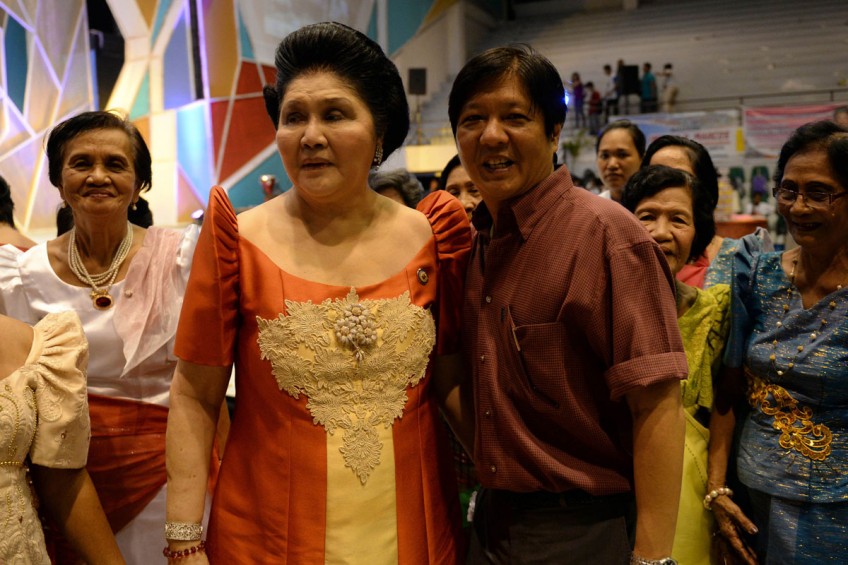 BAGUIO CITY, Philippines-Without the so-called New Society (Bagong Lipunan) and unable to end all forms of insurgency, Ferdinand Marcos had failed to fulfil his public justification for imposing martial law in 1972, according to a paper written by the former president of the Free Legal Assistance Group (FLAG).

"And if the real purpose of the declaration of emergency rule was to cow and intimidate people into submission to permit (Marcos) to rule indefinitely, its success was momentary," wrote lawyer Pablito Sanidad Sr., former FLAG president and now law dean of the University of Baguio (UB).

Sanidad's paper, "States of Emergency: The Philippine Experience (The Marcos Years)," was published by the UB Law Journal in May 2015. The journal was distributed during a lecture of Supreme Court Associate Justice Marvic Leonen on the Constitution and the law on Sept. 10 at UB.

Leonen said Sanidad was the petitioner of one of the landmark cases against martial law, being one of the few lawyers to challenge Marcos' rule in its initial stages.

The case, Sanidad versus Commission on Elections (Comelec), was heard in 1976 by the Supreme Court. It questioned Marcos' authority to amend the Constitution.

On black-and-white television in 1972, Marcos announced that he had issued Proclamation No. 1081 ordering the Armed Forces of the Philippines "to enforce obedience to all the laws and decrees, orders and regulations promulgated by me personally or upon my direction."

Marcos also proposed to rebuild the country into a "New Society" of economic excellence and peace and order.

But under his regime, the ranks of the communist New People's Army (NPA) swelled "from a minor presence in the 1970s to … 30,000 guerrillas (by the 1980s)," while the country was burdened by a $26-billion foreign debt and more than half of the population languished in poverty, Sanidad said.

Horror stories still linger about the curtailment of free speech and the free press. Illegal detentions, disappearances and torture characterized the years of Marcos' rule even after he lifted martial law in 1981 without relinquishing his extrajudicial powers, he said.

Marcos was eventually ousted by a civilian-backed military uprising in the Edsa People Power Revolution in 1986. But his family has retained some measure of political influence.

His son, Ferdinand Jr. or Bongbong, is a senator and being groomed for a higher office. Marcos' widow, Imelda, is the representative of Ilocos Norte while his eldest daughter, Imee, is the Ilocos Norte governor.

He said there were speculations at the time that the Charter change initiatives would lift the constitutional limitations on elected Presidents. "But the sailing would not be smooth" for the constitutional process, he said, given the upsurge of insurgencies, street protests amid social unrest, and rumours of bribery hounding the charter convention.

"Thus, while the Constitutional Convention was still engaged in the task of considering possible amendments … martial law was declared" purportedly to address an armed communist rebellion, Sanidad said.

"The government of Mr. Marcos would not lose in any major constitutional challenge before the Supreme Court … against any of his acts, proclamations, orders or decrees," he said.

On Aug. 21, 1971, a bomb exploded and killed nine people at Plaza Miranda in Manila during a Liberal Party assembly, prompting Marcos to suspend the writ of habeas corpus (an individual's protection against unlawful detention).

Sanidad said this Marcos decree was challenged in the Supreme Court, which affirmed that rebellion existed, giving Marcos a legal precedent for Proclamation No. 1081.

Marcos also ordered members of the judiciary to submit their resignations on or before Oct. 15, 1972, Sanidad said. The judges and justices he allowed to stay would continue serving but were forbidden from handling challenges to Proclamation No. 1081 and other decrees he issued under the emergency rule.

The military courts also heard civilian cases, further diminishing the clout of the judiciary at the time, Sanidad said.

In 1973, Marcos decreed that what is now known as the 1973 Constitution (forged by the 1971 Constitutional Convention and up for plebiscite when martial law was declared) had been ratified.

"If all President Marcos wanted from the Constitutional Convention was a license to stay in office beyond the eight-year limitation … he obtained more than (what) he bargained for," Sanidad wrote.

He said the 1973 Constitution abolished the bicameral system and imposed a unitarian parliament that made the Office of the President a ceremonial and symbolic function.

But because no interim Batasang Pambansa (National Assembly) was in place, Sanidad said Marcos became the country's only legislator from 1973 to 1978, apart from being the President and Prime Minister combined.

The Supreme Court ruled in 1973 that "there is no judicial obstacle to the (1973) Constitution," Sanidad said. The court also declared Proclamation No. 1081 a valid exercise of martial rule, after the court "retreated to a position" where it declared itself incompetent to address a political question, like the declaration of martial law, Sanidad said.

In 1976, Marcos pushed for amendments to the 1973 Constitution, among these a provision giving him the power to continue issuing laws "whenever the interim Batasang Pambansa fails or is unable to act adequately on any matter."

In his Sept. 10 talk, Leonen said: "Many of us are living witnesses to that period of our history called martial law and we know its potential to corrupt government … even if such powers were intended to be held temporarily."

Leonen said law students, lawyers and lawmakers should bear in mind that laws mattered. "It matters who writes (these laws), who invokes them, and who gives its most official interpretation," he said.

"In other words, the coercive power of the law may alter the condition of parties. It can be a tool for social reform. However, it could also be an instrument to maintain a status quo," Leonen said.